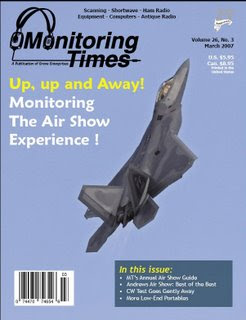 March is here folks, and that means only one thing...time for Monitoring Times annual Air Show Guide.
For the eight year in a row, Monitoring Times features the popular air show issue, including profiles on major demonstration teams, and frequencies on which they are most likely to be found. You will also find information on parachute teams, civilian flight demonstration teams, and even some foreign military flight teams. MT will even tell you the best equipment to bring to the air shows. Still looking for more ? The Milcom column brings you the complete air show schedule for 2007.
On the shortwave scene, my March column of QSL Report features a focus on Radio Prague's Lookout Towers QSL card series. Each year Radio Prague releases a new series of QSL cards, and the 2007 series has collectors raving about the colorful variety. Read on for details on the various towers and how to begin your collection. Readers have contributed QSLs from stations representing Amateur Radio, Canada, Clandestine, Djibouti, Kuwait, Medium Wave, Japan, Russia, St. Helena, Tibet, Travelers Information Station and two Utility stations.
The Broadcast Logs column features shortwave logs beginning at 0003 UTC via Bangladesh Betar to China Radio International's relay station in Canada at 2350 UTC, plus plenty of additional stations to keep you busy at the dials.
Don't forget the center Shortwave Guide for the latest English shortwave and DRM by-hour frequencies. Frequencies are revised monthly, and readers tell us it remains the most current and reliable source for hobbyists.
Finally, read my review of the 61st edition of World Radio TV Handbook 2007. You'll find out what this year's edition features on the clandestine scene, The Future of Radio II, HF Broadcast Reception, plus much more!
For more information on subscriptions, please refer to www.monitoringtimes.com

You don't want to miss the March edition of Monitoring Times. This ones a keeper!
Gayle Van Horn
at 9:06 AM