Radio St Helena to go off the air this year 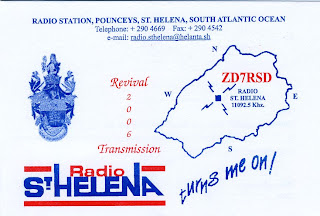 One of the remotest islands on earth, St Helena in the South Atlantic, will experience big changes in its media this year. Radio St Helena, which operates on 1548 kHz mediumwave and for some years broadcast a special once-a-year programme on shortwave via a transmitter of Cable and Wireless, will be closing down. Its parent company, St Helena News Media Services, is being dissolved, and the final edition of its newspaper the St Helena Herald was published on 9 March 2012.

In its place, a new government-funded company called the St Helena Broadcasting Corporation (SHBC) has been set up, and will operate three FM radio stations on the island, one of which will be a relay of the BBC World Service. The intention is that SHBC will become self-sustainable within three years. It officially became operational in February, and will also publish a weekly newspaper to replace the Herald. The first edition will be published later this month, but the radio stations are not expected to go on air until the summer. Until then, Radio St Helena will continue operating.

The other current station on the island, Saint FM that started operating in 2005, was invited to become part of the new organisation, but station manager Mike Olsson subsequently pulled out of discussions. Saint FM provides a 24-hour community service on FM, and is also broadcast on Ascension Island, the Falkland Islands and Tristan da Cunha. Its internet stream enables Saints around the world to keep in touch with their families on the island. Former Radio St Helena station manager Tony Leo can be heard on Saint FM every Wednesday at 1500-1700 UTC. Saint FM also publishes a weekly newspaper, the St Helena Independent.

The resident population of St Helena, who are entitled to hold UK passports but have no automatic right of residence in the UK, is currently just over 4,000, but this is being boosted by the arrival of personnel from the company building the island’s first airport, which is due to open in 2015. It’s expected that the number of tourists per year will rise from the current level of under 1,000 to 30-50,000.
(Andy Sennitt/R Netherlands Media Network Weblog)
at 9:31 AM