Plan to return Radio Vanuatu to its former glory 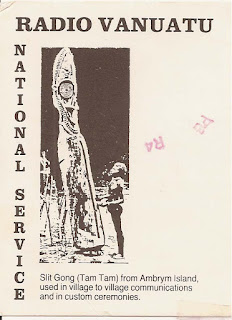 It's hoped Radio Vanuatu will soon return to the standard it once was when it could be heard by everyone in the archipelago.

It's hoped Radio Vanuatu will soon return to the standard it once was when it could be heard by everyone in the archipelago.
Years of neglect and political interference have resulted in the deterioration of transmission to the outer islands but there's a new push to get nation-wide coverage again.
As Bridget Tunnicliffe reports, short wave radio is being seen as important as ever in the Pacific.
The need to get early warnings to people, especially in more remote areas has been highlighted by the increased frequency of severe tropical cyclones. The government recently replaced the Vanuatu Broadcasting and Television Corporation board following concerns over the lack of the public broadcaster's ability to reach the outer islands. An MP for Tanna, Tom Louniwan, says they don't get clear reception on Tanna and it's unreliable.
TOM IOUNIWAN: We depend much of the radio for information because we're now living in the climate change and you know cyclones, and tsunamis and you know.The board's new chair Johnety Jerety says nation-wide coverage has to be implemented by July 1st under the government's 100 day plan. He says they are on track to achieve that but says part of the problem is people have been buying cheap radios that are not compatible. He says out of habit people have also become more accustomed to tuning into the island's main FM station.
JOHNETY JERETY: Because they have lost coverage with Radio Vanuatu for so long they now have difficulties in tuning in to our frequency system and that is what we are doing now to promote all these frequencies to the islands, to ensure that everyone knows which type of frequency they should be tuning in.New Zealand radio transmission engineer, Steve White, has made several trips to Vanuatu and other Pacific countries to help set up transmission equipment. He says the big advantage of short-wave radio is that receivers are extremely cheap to buy. Mr White says the other benefit is that the transmission is capable of covering enormous distances.
STEVE WHITE: From Port Vila you can cover the entire country of Vanuatu, which spans something like 1100 kilometres in a roughly North-South direction, that can't be achieved by any other transmission mode.Johnety Jerety says despite increases in government funding to the Corporation over the years, changes in government and political interference have been disruptive.
JOHNETY JERETY: Politicians come as members of parliament and then they use the opportunity to turn out funds from the institution and make it very difficult for the institution to have enough or appropriate funds to maintain its transmission system.Johnety Jerety says Radio Vanuatu's financial difficulties have been heightened by the emergence of several other FM stations, who are all competing for advertising dollars. The former mayor of Luganville, Maurice Emboe, says the quality of information being broadcast is also critical. Early this month there were claims in northern parts of Vanuatu, that the public broadcaster did not broadcast warnings about the approach of Cyclone Zena. Maurice Emboe says information needs to be accurate, timely, and regular.
MAURICE EMBOE: The authorities concerned, the media also should take more responsibility in communicating with regards to disaster or such information. To inform people, communicate with people, the tracking of these depressions, its whereabouts.Johnety Jerety says he's had several meetings with technical people and is confident nation-wide coverage will be achieved by Radio Vanuatu by the July 1 deadline.
http://www.radionz.co.nz/international/programmes/datelinepacific/audio/201798107/plan-to-return-radio-vanuatu-to-its-former-glory
(Romero/playdx)
at 11:00 AM