The Radio Scene in Portuguese Macau 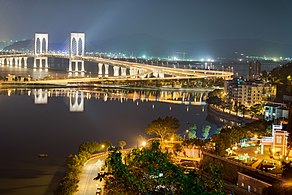 Here in Wavescan last month, we presented Part 1 of the Radio Scene on Portuguese Macau and we covered the story of their early wireless and radio broadcasting stations during the prewar years.  The main radio transmitter back then was in use for both international communication as well as for the broadcast of radio programming under the consecutive callsigns CQN CRY9 and CR8AA.

In our program today, we pick up the Macau story again at the time when the war in Asia, Japan versus China, was well under way, and it was soon to explode into the dramatic Pacific War running from 1941 to 1945.  On the same day, Sunday December 7 in Hawaii and Monday December 8 on the western side of the International Date Line, Japanese forces made a surprise attack on several strategic locations in the Pacific, including Honolulu in Hawaii, and the island of Luzon in the Philippines, and also the British colonial territory of Hong Kong on coastal China.

Because Portugal over in Europe remained neutral during World War II, and because Macau was a Portuguese colony in coastal China, this small Asian territory was spared much of the devastation that overtook the Asia-Pacific arena.  However during this tragic war, Macau became a refugee center with an estimated half million refugees flowing in from other areas of Asia.

The main influx of refugees came from mainland China, with an additional 9,000 flowing in from Hong Kong.  These large migrations produced drastic shortages of food and accommodation in Macau.

Initially the Japanese authorities accepted and respected Macau’s stance of neutrality during the Asia-Pacific War.  However in August 1943, Japanese troops seized a British cargo steamer at Macau, the Sian (X’ian), and this event led to the installation of Japanese advisors over the colony.

Towards the end of the Pacific War during the year 1945, American planes bombed Macau three times, for which the United States made a reparations payment of $20 million to Portugal five years later.  The first American air raid took place on Tuesday January 16 during the South China Sea Raids as part of Operation Gratitude.

At the time, United States navy vessels were passing nearby during heavy stormy weather and their planes bombed the Naval Aviation Center on coastal Macau, and destroyed the reserve tanks of aviation fuel.  In addition, they also bombed a radio station on the main Macau Island.  Next day, Tokyo Rose announced in English on Radio Tokio shortwave: We don’t know how you got into the area; but now, how will you get out?

We turn now to the radio scene in Portuguese Macau beginning just before the middle of last century.  It was during the year 1941 that Radio Clube Macao was formed and they inherited all of the equipment and installations of the former radio station that had been on the air under the consecutive callsigns CQN and CRY9.  At this stage, their operating frequency was 6070 kHz, and they were then identified with a new callsign, CR8AA.

This new callsign CR8AA gives the appearance that it was an amateur radio callsign, though in actual reality, this call identified the station when it was on the air for the broadcast of news and entertainment programming.  Interestingly, the international prefix CR8 would identify another Portuguese colony, Goa in India rather than Macau in China.  However during that era, with Asian tensions rising high, we would suggest that the Portuguese government in Europe required their shortwave station in Macau China to identify with a callsign relevant to Goa India in order to add a touch of combined psychological strength to their distant colonies.

The studios for this pre-war shortwave station were always located on the top floor of the Post Office building in downtown Macau, and the transmitter was always located at Dona Maria Fort, Fortaleza da Dona Maria 2.  This fort was constructed by the Portuguese authorities in 1852 at an isolated location on a small peninsula jutting out into the bay from the main island of Macau.  The 500 watt shortwave transmitter was constructed in three separate units; the low power driver transmitter, a 500 watt amplifier, and a separate rectifier.

A photograph in a radio magazine in 1935 shows three tall masts at Fort Dona Maria, two of which were identified as supporting the zeppelin antenna that was in use for the shortwave transmissions from station CR8AA.  A third mast in the photograph was not specifically identified, though we would suggest that it was in use as a receiving antenna for two way communication traffic.

The radio station that the American planes bombed on January 16, 1945 was this historic low powered shortwave station CR8AA at Fort Dona Maria.  However apparently the damage to the transmitter facility was not too great, because in August, the station was heard again, at good strength by Mr. R. Clack in Australia on 7530 kHz.  In a monitoring report published in the Australasian Radio World, DX Editor Lawrence J. Keast commented: Radio Club Macau has made a welcome re-appearance after its long silence.

An oversized QSL card issued to a listener in Sweden for reception in December (1945) shows an artistic representation of coastal scenery in Macau.  The English text on this QSL card verifies reception on 7505 kHz, though subsequently they moved again to 9300 kHz.
More about the radio scene in Macau another time.
(AWR Wavescan/NWS 16)
at 11:44 AM