The Radio Scene on Snake Island

It is true; there are several islands in various places around the world that have been given the name Snake Island.  It is quite probable in almost every case, that the reason why the name Snake has been appended to the island is quite obvious; snakes were found there. 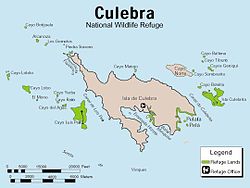 The island that we refer to in our program today is located just 17 miles off the east coast of Puerto Rico; it is 9 miles north of Vieques Island; and it is 12 miles west of St. Thomas Island.  It is in itself, the major island of a small archipelago of 23 smaller islands, only a couple of which are inhabited.      Our Snake Island in the Caribbean goes under the preferred name, Culebra Island; a Spanish word that is readily translated into English as Snake.  It is true, a few snakes are found on this island, but the snake population here is not significant.
Spanish historians inform us that the first European to visit Culebra Island in the Caribbean was the famous Italian born Spanish navigator Christopher Columbus.  It was during his second voyage to the New World in 1493 that he made a brief visit to Culebra Island, which at the time was inhabited by a colony of Carib Indians.
However, it was not until nearly three hundred years later that a European settlement was established on the island.  Under orders from the Spanish government in Spain, Sr. Cayetano Escudero Sanz from nearby San Juan on Puerto Island established a colony on Culebra Island on October 27, 1880.
The name given to this new Spanish settlement was San Ildefonso, and ultimately the name acquired by the island was Culebra.  Both names, San Ildefonso and Culebra, honored the Bishop of Toledo in Spain, San Ildefonso de la Culebra.
Two years late, work commenced on the construction of a lighthouse  on Culebra in 1882, and for nearly a century it was the oldest active lighthouse in the Caribbean.  The lighthouse was closed in 1975.
After the Spanish-American War, the United States took over Culebra Island, as one of the  Puerto Rico islands, around the year 1900.  An American naval station was established on the island in 1902, and subsequently areas of the island were used for the now controversial live target practice from nearby navy vessels.
The island is a very irregularly shaped island of just 11 square miles.  The current population of a little less than two thousand is made up mainly of descendants of both the early European settlers together with slaves brought over from Africa.
During the year 1903, a spark wireless station was established on the newly designated American naval encampment on Culebra Island, Camp Roosevelt, and this was before a similar station was established in the islandic capital, San Juan.  This Morse Code station on Culebra was a 3 kW composite unit made up of equipment from more than one manufacturer.
It was inaugurated under the informal callsign SD and it operated on 425 metres,705 kHz, a frequency that was within what is now the standard mediumwave band.  When the navy regularized the callsigns of their entire worldwide network of wireless stations in 1909, station SD on Culebra Island was redesignated as NAV.
The first radio broadcasting station on Culebra Island was an FM facility that was originally established in the nearby United States Virgin Islands.  On June 10, 1973, commercial station WVIS
was inaugurated in Frederiksted on the southern island of St Croix with 9.5 kW on 106.1 MHz.  The chosen callsign was WVIS, a call that had earlier been on the air in Indianapolis Indiana, and also in Jupiter in coastal Florida.
It is stated that this commercial FM station was off the air as much as it was on the air, though it is true that it was damaged and destroyed consecutively by three different hurricanes.  When the station was ten years old, an attempt was made to transfer it from Frederiksted and re-establish at nearby Christiansted on the same St. Croix Island.
In any case though, half a dozen years ago, station WVIS was relicensed for reinstallation on St. Croix Island, with the intent to transfer from the American Virgin Islands to what are sometimes colloquially called the Spanish Virgin Islands.  Thus it was that commercial FM station WVIS on St Croix Island was transferred and re-installed on three different islands; Vieques, Puerto Rico and Culebra.
This unique FM radio broadcasting station, WVIS, is licensed for primary coverage of Vieques Island, due east of Puerto Rico.  The studio and main office is located on Puerto Rico island in the small town of Luquillo near the east coast; and the transmitter is installed on Culebra Island, Snake Island, a little to the north of Vieques.


Station WVIS, which also identifies as Radio Joe is licensed for 50 kW on 106.1 MHz FM.  The music format, which is mostly automated, is a mix of English and Spanish contemporary hits, including electronic, reggae and hip-hop.
Another FM radio broadcasting station on Culebra Island has been on the air under at least four different callsigns during its thirty year history.  Back in 1988, it was inaugurated under the callsign WXZX, but due to sales to different owners, changes in frequency and power, and changes in program formats, this station has been known variously as WJZG, WNVE and the now current WQML.  Currently, station WQML, a Spanish language Christian station that identifies as Pura Culebra or in English as Pure Culebra, is also a Christian station that emits 6 kW on 98.7 MHz.
There was another FM radio station on the air on Culebra Island, and that was WJVP, with 30 kW on 89.3 MHz.  This station was inaugurated on February 19, 1996, though it is currently silent.
And finally, another radio station of importance on Culebra Island is station WNG693, with 300 watts on 162.45 MHz.   This station is operated by NOAA, the National Oceanic and Atmospheric Administration, and its sole purpose is to provide weather information and warnings for Culebra, Vieques and eastern Puerto Rico.  A special weather band receiver is needed to tune to station WNG693.
(AWR-Wavescan/NWS 434)
at 11:00 AM