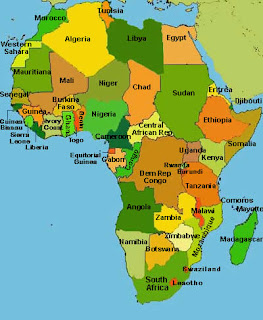 In the past 48 hours, two African stations have made their presence felt on 6 mHz. The observations below were noted here at Mount Evelyn. But I'm pleased to give credit to my DXing friend and fellow amateur radio operator, Jordan Heyburn MI6JVC, who alerted me and other members of the WRTH Facebook group to the current operations of both these broadcasters. Jordan lives in Armagh, Northern Ireland and is very active on both the shortwave broadcast and ham bands.

5995   MALI. Radiodiffusion Télévision du Mali - Bamako.Noted at Mount Evelyn via the long path at 0655 UTC with unusual African instrumental sounds, then news in French at 0700. Occasional phoned-in news reports. At 0720, Malian stringed music behind studio announcements, then more commentaries. A Malian song at 0725. This station appears to have taken some corrective measures at the transmitter as it seems to be producing much better modulation and audio now. Perhaps the problem that has plagued this outlet for years may now be fixed? I couldn't hear them at all last week, so definitely something has changed! Not a strong signal but quite good considering it was long path propagation. July 26.

6250   EQUATORIAL GUINEA. Radio Malabo (Radio Nacional de Guinea Ecuatorial) - Malabo. First tuned in at 2015 UTC but all that could be heard was Echo of Unification plus heavy jamming. But I waited until propagation from Korea started to dissipate (high signal absorption along the daylight path between Korea and Mount Evelyn fixes that!). Actually, the Korean interference fell away very quickly around 2125. Radio Malabo could then be heard and clearly noted at 2130 with Spanish IDs and announcements. Then into back-to-back Afro music programming with no further announcements. A fair signal from 2130 but weakened considerably by 2210. More announcements at 2230 and the station finally faded by 2250. Great to see this station reactivated after a long absence. July 27.

Further Note:
Dave Kernick (USA) has some really interesting audio of Radio Malabo shortly after Jordan first heard it. Dave recorded this "in the period 23:00-23:10 UT on 26 July 2017. In this 4-minute clip you'll hear a 'canned' ID followed by live ID and frequency announcement. This was monitored on shortwave 6250 kHz via a remote web SDR receiver located in Asferg, northern Denmark." Check out Dave's Soundcloud file at:  https://soundcloud.com/intervalsignals/radio-malabo-radio-nacional-de-guinea-ecuatorial-26-july-2017
Thanks Dave.
73 and good DX everyone,
Rob Wagner VK3BVW