Year of the Pig QSL from Radio Free Asia

Radio Free Asia (RFA) announces its 2019 Year of the Pig QSL. Those born in a Pig years are considered energetic, positive thinkers and gentle. They are also focused and when they make up their minds to do something, there is evidently little you can do to stop them.  Pigs lead very busy lives and must remember to take breaks in order to rest. Pig years are celebrated every twelfth year. The other Chinese zodiac animals and associated years are Rat, Ox, Tiger, Rabbit, Dragon, Snake, Horse, Goat, Monkey, Rooster and Dog. This is RFA’s 69th QSL design and is used to confirm all valid RFA reception reports from January – April 2019. 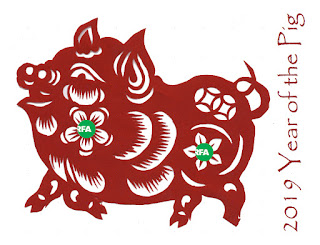 
Created by Congress in 1994 and incorporated in 1996, RFA broadcasts in Burmese, Cantonese, Khmer, Korean to North Korea, Lao, Mandarin (including the Wu dialect), Vietnamese, Tibetan (Uke, Amdo, and Kham), and Uyghur. RFA strives for accuracy, balance, and fairness in its editorial content. As a ‘surrogate’ broadcaster, RFA provides news and commentary specific to each of its target countries, acting as the free press these countries lack. RFA broadcasts only in local languages and dialects, and most of its broadcasts comprise news of specific local interest.  More information about Radio Free Asia, including our current broadcast frequency schedule, is available at www.rfa.org.

RFA encourages listeners to submit reception reports.  Reception reports are valuable to RFA as they help us evaluate the signal strength and quality of our transmissions.  RFA confirms all accurate reception reports by mailing a QSL card to the listener.  RFA welcomes all reception report submissions at http://techweb.rfa.org (follow the QSL REPORTS link) not only from DX’ers, but also from its general listening audience.

Andrew Janitschek of Radio Free Asia includes, "RFA's mail server will not except attachments file types, like ZIP, EXE, RAR, ISO, CHM, and more. If you go more than one-two months without hearing from us about your reception reports, please do a follow-up and write us at qsl@rfa.org. We are happy to confirm your reception reports, but we all have to work within the limits our system. Thank you for your patience and understanding. "