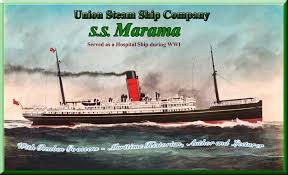 Throughout the entire one and a quarter centuries of wireless and radio history, there have ever been only two stations that have been allotted the callsign VLR.  The first application of the call VLR was for the communication transmitter aboard a small passenger/cargo ship in the waters off New Zealand, and the second application of the callsign VLR was for the  the internationally well known low power shortwave service operated by the ABC and Radio Australia at Lyndhurst in Victoria.

The normal peacetime service of the SS Marama was interrupted for a period of four years during World War 1 while it was in use as New Zealand’s second Hospital Ship for soldiers wounded on service in Europe.  On one occasion, the Marama was accosted by a German submarine in the North Atlantic, but as a hospital ship it was permitted to move on unmolested.

The Marama was laid up at Evans Bay, Wellington in 1936, and next year it was sold to China, and then sold again, this time to Japan at a nice profit.  It was broken up at Osaka in Japan during the year 1938.

During the early 1920s, the callsign aboard the Marama was VLR, and this callsign was modified to ZLR on January 1, 1929 due to new international radio regulations.  During the 1930s, there were times when a daily newspaper was published aboard the Marama with news taken from various radio sources.  This daily newspaper was given the appropriate though rather unimaginative title, Daily News.

The original VLR shortwave station in Australia was born in a galvanized iron shed on top of a low rise near Lyndhurst some 25 miles southeast of Melbourne in Victoria, in 1928.  Back then, this locally made 600 watt transmitter was operated experimentally without callsign on 5800 kHz.  However, due to the fact that the audio source for this little new shortwave transmitter was taken from the two mediumwave stations in Melbourne, 3LO & 3AR, then the shortwave unit was soon afterwards given a sort of combined call 3LR.

Due to a change in international radio regulations, amateur stations in Australia were required to add the prefix VK to their callsigns, by December 31, 1928.  In order to ensure the change of callsign throughout Australia by the effective date, the Chief Radio Inspector Mr Jim Malone authorized the usage of the new VK prefix from December 8 onwards.  That was for all amateur radio stations.

During the year 1934, a new building was constructed adjacent to the old original shack at Lyndhurst, and on  March 12, shortwave 3LR began a regular relay of programming for the benefit of people living in Australia’s isolated outback areas.  At this stage, the transmitter was still operating at just 600 watts and the usual channel was 9580 kHz.  The regular broadcast antenna was a horizontal half wave doublet at 95½ degrees from true north, with a radiation lobe towards the great outback.

Back during this era, the Lyndhurst transmitter with its programming relay from 3LO and 3AR was identified officially and unofficially as both 3LR and VK3LR.  In experimental usage though, the allotted callsign was VK3XX, with the X following the American pattern identifying an experimental station.  In May 1935, the 600 watt transmitter was engineered to operate then at 1 kW.

Around June 1936, transmitter (VK)3LR began to carry an experimental 10 minute bulletin of news twice weekly in French for the benefit of French islands in the South Pacific.  This genuine overseas foreign language service, though quite short in duration, was a forerunner to the inauguration of Australia Calling/Radio Australia three years later.  The French Consul-General in Sydney made request for the continuity of this French language service.

In 1937, the Lyndhurst transmitter was completely reconditioned and the power rating was increased to 2 kW, though still with the same original transmitter.  Soon afterwards, the power level was again increased, this time to 5 kW.

At this stage, the lonely little shortwave transmitter at Lyndhurst now radiated through two antenna systems as needed; for national coverage through the same horizontal doublet, and for international coverage, a rhombic beamed on Daventry in England.  December 1 (1937) was the official date for the regularization of the callsign from (VK)3LR to the now more familiar VLR.
More about VLR next time.
(Jeff white, Adrian Peterson-AWR Wavescan 547)
at 10:00 AM