There are still a few weeks to the close of April and your chance of the RFA Year of the Ox QSL. Stay tuned to this blog for the latest RFA QSL news of a new edition, when it becomes available.
Special thanks to A.J. Janitschek, Director, Program and Operations Support, Radio Free Asia

Radio Free Asia (RFA) announces its latest QSL card commemorating 2021 as the Year of the Ox according to the Chinese astrology calendar. People born in ox years are considered kind, caring, logical, positive, having a great deal of common sense, and live with their feet ‘firmly planted on the ground.’ They are also considered to be hard workers in order to provide comfort and security for their families, while also highly intelligent and strong-minded. The ox is one of 12 animals used in the Chinese Zodiac; the others are tiger, rabbit, dragon, snake, horse, goat, monkey, rooster, dog, pig, and rat.  This QSL card confirms all valid reception reports from January 1 – April 30, 2021. The design was created by RFA’s Brian Powell. 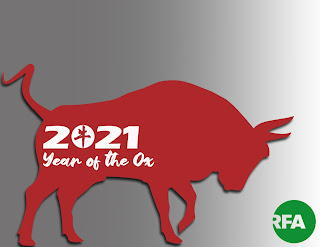 Created by Congress in 1994 and incorporated in 1996, RFA broadcasts in Burmese, Cantonese, Khmer, Korean to North Korea, Lao, Mandarin Chinese, Vietnamese, Tibetan (including Uke, Amdo, and Kham dialects), and Uyghur. RFA strives for accuracy, balance, and fairness in our editorial content. As a ‘surrogate’ broadcaster, RFA provides news and commentary specific to each of our target countries, acting as the free press these countries lack. RFA broadcasts only in local languages and dialects, and most of our broadcasts comprise news of specific local interest.  More information about RFA, including our current broadcast frequency schedule, is always available at www.rfa.org.

RFA encourages listeners to submit reception reports.  Reception reports are valuable to RFA as they help us evaluate the signal strength and quality of our transmissions.  RFA confirms all accurate reception reports by mailing a QSL card to the listener.  RFA welcomes all reception report submissions at http://techweb.rfa.org (follow the QSL REPORTS link) not only from DX’ers but also from our general listening audience.