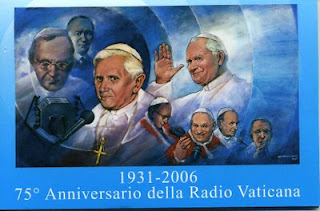 Vatican State
Vatican Radio, released an application for iPhone and iPad. As is the case with the previous, which was released in early September for Android, a new application has a strong mulmediynuyu
orientation.
One tool allows you to listen to the live broadcast, all five channels of our programs in 40 languages, watch live video, surf the web, watch out for exclusive news and the daily Pontifical meetings.
The application can be downloaded for free from the website at ITunes:www.rv.va iphone
The application opens the information section "Calendar", dedicated to the public meeting of the Holy Father. This part of the first version of the application is available in Italian, English, French, Spanish and Chinese. Due to the special system, designed and developed by experts Vatican
Radio, the information each event Pontifical linked to all the articles and audio recordings in the selected language and the languages ??of the thirty-nine language editions of Vatican Radio.

In addition, the "Calendar" is constantly updated, announcing radio and video broadcasts Papal worship and meetings, produced in collaboration with the Vatican television center.

A new application for iPhone offers the service of "News", through which users can read the latest news from reporters Vatican Radio major current events in the world and the Church. This service is the first version of the application is available in Italian and English.

Another part of the new application is to "Radio" with five audio channels, which correspond to the broadcast networks over seventy daily programs in 40 languages ??Vatican Radio, including in Russian. Vatican Radio, except device platforms iPhone and Android, soon plans to also introduce a new application for Windows Phone.
http://onair.ru/main/enews/view_msg/NMID 42164/ # ixzz28uRWP8VZ
(Dmitry Kutuzov-RUS, deneb-radio-dx via midxb Oct 16)
(WWDXC/Top News 1082)