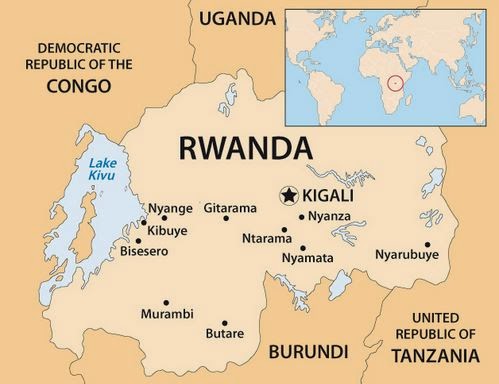 In the Land of a Thousand Hills


On this occasion here in Wavescan, we return to the radio scene in the small landlocked country of Rwanda in Africa.  Last weekend, the final broadcasts from Deutsche Welle Kigali were noted by international radio monitors in many countries throughout the world, and this majestic shortwave station has now gone silent.  Also silenced at the same time, was the national broadcasting system on shortwave in Rwanda, and that is our story for today.
The first radio broadcasting station to go on the air for coverage of Rwanda was not located in Rwanda itself; it was located in neighboring Burundi, which at the time was linked with Rwanda as a politically double territory.  In 1960, Radio Usumbura, located in their capital city Usumbura, was inaugurated with 10 kW on 6195 kHz.

In preparation for Rwanda’s coming independence, a radio broadcasting service was officially organized on May 19, 1961.  Their first transmitter, we would suggest, was located at the government wireless station that had been established in Kigali in 1930.  The first known reference to this new radio broadcasting service is found in the Australian magazine Radio & Hobbies for January 1962 in a note from the highly esteemed Arthur Cushen in New Zealand.  Arthur Cushen appears to be quoting from another source for this item, perhaps in the United States or maybe in Sweden.
Programming from this new shortwave station, it was stated, was in the French language, and also in local languages.  Perhaps some, if not all of this radio programming, was relayed from the new shortwave station already on the air in neighboring Usumbura in Burundi.
In 1962, the government of Belgium granted independence to the double unit Rwanda-Burundi, and Rwanda became a separate and independent nation in its own right.  At this stage Germany had already begun work on establishing a shortwave relay station for Deutsche Welle, near Kinyinya, some ten miles north of the now capital city, Kigali.  The inaugural broadcast from this new shortwave station in Rwanda took place on August 30 of the following year 1963, with the usage of a temporary 600 watt transmitter on 7225 kHz (mornings) and 7295 kHz (evenings).
However, around that same time, a 5 kW transmitter was installed in the same Deutsche Welle facility and this radiated programming on behalf of Rwanda National Radio on 6050 kHz.  Then during the following year, a 50 kW Philips transmitter model 8FZ514/01 was installed and this took over the same shortwave channel in the 49 metre band, which was stabilized on approximately 6055 kHz.
Programming was produced locally in a studio in the capital city, though Radio Rwanda also relayed daily news bulletins in French from neighboring Radio Burundi.
A dozen years later, the 5 kW transmitter was reactivated in 1976, this time on the tropical band channel 3330 kHz.  As time went by, a 20 kW RIZ transmitter from Croatia model OR20K1 was installed (1984) followed by a 100 kW ABB model SK51F3-2P (1992), apparently operating at half power.  For the last decade or so, Radio Rwanda shortwave has been noted on usually just one channel, the same 6055 kHz.
Radio Rwanda has never been on the air on mediumwave, though two high powered mediumwave transmitters were planned in the early 1980s; 100 kW on 1512 kHz for Kigali, and 50 kW on 1530 kHz for Gitirama.  Instead Radio Rwanda continued the development of a nationwide network of FM stations beginning around the mid 1970s and they abandoned the plans for mediumwave coverage.
During the time of trouble in Rwanda, the Deutsche Welle/Radio Rwanda shortwave station was safeguarded by a two mile long wall with metal spears on top completely surrounding the station, and the approach road was barricaded and mined.  On April 13,1994, the German staff, (seven men, three wives and a child), were rescued by two Belgian helicopters and these personnel were taken to Nairobi in Kenya for safety.
At times during the long drawn out era of intertribal fighting, the relay station was sometimes off the air, particularly when the electric power was interrupted.  During this era of turmoil, Radio Rwanda was still on the air at times with the usage of a standby generator powering the 20 kW transmitter.  However, in all of these tragic events, the station remained undamaged .


However, after more than 40 years of on air service, the Deutsche Welle relay station was closed over the last weekend of March, and thus the broadcasts from Radio Rwanda on shortwave also came to an end.  At the time, there were five active shortwave transmitters, four at 250 kW and one at 100 kW.  These days, the nationwide network for Radio Rwanda is on the air on FM only.

Several Rwanda QSL cards of interest are known.  The DW card that was issued from their headquarters  in Cologne in Germany showed a map of Africa in yellow superimposed upon a background of strong blue, though other DW cards were also issued to verify the reception of their African relay station, with Kigali written in as the location.
The generic Radio Rwanda QSL card shows a bulls eye target of circles with no specific QSL details.  A Radio Netherlands card verifies their relay via Kigali; and AWR also issued many different types of QSL cards to verify their relay via Kigali, usually with what is now a rare Kigali QSL stamp.
We should also mention that AWR established an FM station in Kigali some 10 years ago.  The station is installed in the building that serves as the headquarters for the Adventist denomination in Rwanda, and it is located in the Kacyiru sector of Gasabo district in Kigali.  This FM station was inaugurated on March 10, 2005 and it can be heard at 106.4 MHz.
And before we leave the Rwanda scene, we should mention that Adventist World Radio made two earlier attempts at instigating a relay over the Deutsche Welle shortwave station at KIgali.  The first attempt was in mid 1975, when a series of daily half hour test broadcasts in the Swahili language was scheduled, and the second attempt was two years later.
There is no record that the two projected AWR relays via DW Kigali ever went to air, even though the first tapes were delivered to the station.  There were unexpected delays in the production of AWR programing in the Swahili language.
On the third occasion for an AWR relay via Kigali, the programs were on the air for 2½ hours daily for just the recent B14 transmission period which ended during the last weekend in the month of  March when the station was closed.
(AWR-Wavescan/NWS 319)
at 11:01 AM