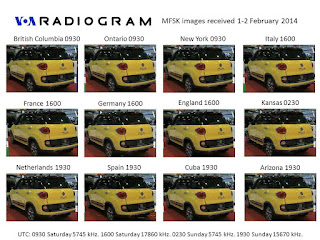 We begin with good news and bad news.

The good news is that last week's special broadcast to the Notte Europea dei Ricercatori (European Researchers' Night) in Frascati, Italy, was heard and decoded well in Frascati and many other places. I was worried about that 17880 kHz frequency at 1830 UTC, but it propagated nicely over the north Atlantic. See images as decoded in Frascati and photos from the event.

The bad news is that no one responded to the BBG's request for proposals for the development of a digital mode decoder app.  The deadline was very tight (it was an end-of-fiscal-year gambit) and the specifications were rather complicated, so the lack of a response is not a complete surprise.

I hope the developer community can fill the need for a decode-only app, for PCs and for mobile devices. Please encourage shortwave broadcasters to try MFSK32 text and images, even if only for a few minutes a week. This will encourage developers to produce MKSK32 decoders. Perhaps even receiver manufacturers will take an interest.

Meanwhile, this weekend, let's hope that Hurricane Joaquin and a forecast nor'easter do not disrupt broadcasts from the North Carolina transmitter site.

VOA Radiogram will be all MFSK32 text and images, except for some Olivia 64-2000 mixed with the closing music.

The Mighty KBC will transmit a minute of MFSK32 Sunday at 0230 UTC (Saturday 10:30 pm EDT) on 7375 kHz, via Germany. Reports for this KBC reception to Eric: themightykbc@gmail.com .

Thanks for your reception reports last weekend. I'm now preparing the gallery of MFSK images from program 124 and will be sending out email responses during the next few days.