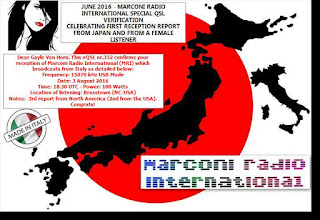 Special thanks to Radio Marconi for their QSLs to me, and the station information to share with the blog readers. Have you heard RMI ??
Gayle Van Horn

We are a small free radio station broadcasting from the Italy which, after 15 years of dormancy, returned back to the airwaves on 15 August 2015. MRI began its short wave transmissions on 4 January 1986 and this year celebrated its 30th anniversary as well as one year on the air since it resumed broadcasting  quite regularly.  Until now, reception reports, found to be fully correct, have been received from listeners in Austria, Belgium, Bulgaria, Canada, Czech Republic, Denmark, Finland, France, Germany, Greece, (Northern) Hungary, Ireland, Italy, Japan, Latvia, The Netherlands, Norway, Poland, Romania, Russia, Spain, Sweden, Switzerland, Ukraine, United Kingdom and USA.  It should be also mentioned that the station has recently been logged by  SWLs  in Portugal. 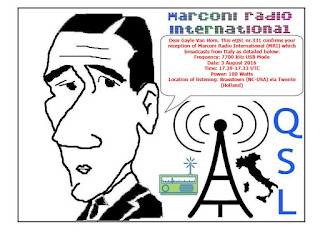 Our broadcasts include some kind of programs now sadly missing from most shortwave radio stations:  an old style DX show in English “Italian Short Wave Panorama” (there is also the Italian version called “Panorama Onde Corte”) with lot of recent logs  as well as  a mailbag show (“La Posta degli ascoltatori”) in Italian. As from 8 September 2016 a music show in Italian (“Border Line”) is also being aired. Our  station identification announcements are not only in English and Italian but also in French, German, Japanese, Romanian, Spanish and Catalan.

We hope to extend the duration of our broadcasts in the near future and also to increase power. We also plan to send in printed QSL cards by snail-mail but only to some lucky listeners. That’s why it’s vital to let us have your postal (street or P.O. Box) address.

For the first time in our history a Facebook page about our station has been introduced. It is called "MRI World" and can be found at this web address: https://www.facebook.com/mriworld - Although it is still  far from being completed  you can like it or leave your comments and suggestions.
Unlike a number of free radios from Northern of Europe we know what a QSL is and our verifications will always come with ALL details about reception of MRI.
(RMI)
at 9:36 AM