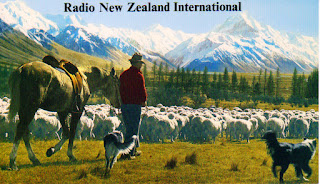 At the end of June, Radio New Zealand International closed its quarter century old analog transmitter located at Rangitaiki in the center of the North Island of New Zealand.  But first, we go back in time.
It was time for change.  The shortwave transmitters in the radio broadcasting station at Titahi Bay, out from Wellington in the North Island of New Zealand, were vey old and quite low powered.  Over the years several different locations had been suggested as a possibility for erecting a new shortwave station that could speak to the Pacific Islands with a louder voice.
In fact, one specific location that had been given serious consideration by the New Zealand cabinet was at Waiouru towards the center of the North Island.  The large transmitter complex at Waiouru was operated by the New Zealand navy and it was suggested that this would be a suitable location for an additional transmitter installation for the new shortwave voice for New Zealand.   The projected plan for this new location in 1981 called for four transmitters at 50 kW each.
However, nine more years went by before the new station became an electronic reality.  The location was changed from Waiouru to Rangitaiki, a change in distance of some 50 miles; and the transmitter complement was changed from four at 50 kW to just one at 100 kW.  A long range plan called for an additional 100 kW transmitter and a total of four curtain antennas.
The dominion government approved the new shortwave station for Rangitaiki with two immediate purposes in mind: Growing political instability in some of the small Pacific Island nations, and the need for adequate media coverage during the forthcoming Commonwealth Games.  The new shortwave station was readied, and test transmissions went on the air at the end of the year 1989, and into January of the new year 1990.
According to the well known New Zealander, Arthur Cushen, the new 100 kW Thomson transmitter Model 2315 from France was officially taken over at Rangitaiki by the New Zealand authorities on December 6 (1989).  At that stage, there were just two antennas, both TCI high band curtains from California, and the original concept indicated that the transmitter output could be split and fed into both antennas simultaneously as needed, thus giving a wider area of coverage.
The studios for Radio New Zealand International are located in Radio House in Wellington.  The unmanned distant transmitter at Rangitaiki is remotely operated from Wellington; and there is a digital program feed from studio to transmitter, a distance of nearly 200 miles.
The brand new transmitter station was officially opened at 0400 UTC, Sunday afternoon locally, on January 24, 1990, at the commencement ceremony for the Commonwealth Games, by His Excellency Governor General Sir Paul Reeves.  The inaugural broadcast was beamed to the Pacific on 17680 kHz and it was reported widely.  RNZI printed a limited edition QSL card of just 100 copies for the occasion.
The Commonwealth Games are similar to the international Olympic Games, though participants are limited to only the countries that form the British Commonwealth of Nations, the former British Empire.  The 1980 games were staged in Auckland at the top of the North Island, the largest city in New Zealand with a current population of 1.3 million people.
Programming for RNZI shortwave is taken from the regular Radio New Zealand mediumwave services in the YA and ZB networks, and regular daily programs also are produced by the shortwave staff, which numbers no more then half a dozen people.  In addition, regular daily news bulletins are broadcast in the local Polynesian languages of the South Pacific Islands.
Just nine months later, beginning on September 12 (1990), the new transmitter began a month long period of non-stop operation in an attempt to stabilize its operation.  During that time period, this new transmitter had malfunctioned a total of 89 times since it was taken into service.
A couple of years later, two low band antenna systems were installed; seven years later again, the transmitter was stuck on 17675 kHz due to a switching malfunction.  There were times when the transmitter was run at 50 kW as an economy measure; and on several occasions the station has operated overnight as well during cyclone emergencies in the South Pacific.  One astute international radio monitor noted that RNZI ended its daily transmission on 9885 kHz at 1310 UTC, and then it switched to 6095 kHz for a brief transmission lasting no more than 5 minutes, as a preparation for the opening broadcast next day.
On a couple of occasions in November 2001, RNZI conducted a brief series of test broadcasts during the day on frequencies in the  6 & 7 & 9 MHz bands, in order to ascertain whether nationwide coverage could be obtained from a single location in the event of a nationwide emergency.  The experimental frequencies were 6095 kHz & 7205 kHz & 9700 kHz.
A lightning strike on August 30, 2003 put the station off the air for three months, and during this time Radio New Zealand International was noted on relay via Radio Australia in Shepparton Victoria.
A new second transmitter, a Thomson digital DRM ready unit Model TSW2100D, was installed in 2006, and this enabled RNZI to broadcast simultaneously via the two transmitters in both the analog and digital modes.  Several local FM stations located on South Pacific Islands were thus granted the opportunity to relay locally the programming in good quality from New Zealand.
This 10 year old analog-digital DRM transmitter is currently the only unit on air at Rangitaiki and it is switched from one mode to another, digital and analog, as is required out in the distant islands.  The original quarter century old analog transmitter was finally switched off for the last time, on June 30 earlier this year.
However, this may not be the end of the story.  The WRTVHB for each year running from 2013 up to the present time states that a future plan for RNZI is the installation of a 300 kW analog-digital DRM capable shortwave transmitter.  Let the future tell its own story.
(AWR-Wavescan/NWS403/A Peterson)
at 7:30 PM