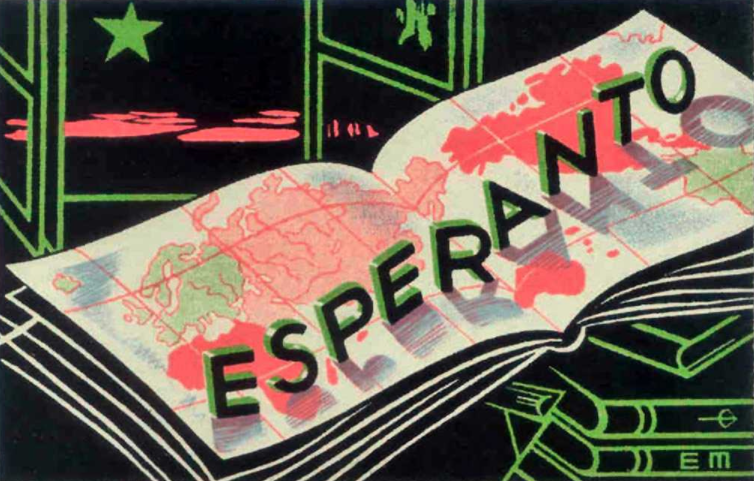 By far, the most popular artificial language that has ever been created is the language known under the title Esperanto.  The very name, Esperanto, means one who hopes.

It was Dr. Ludwig Zamenhof, a Polish eye doctor, who developed the Esperanto language and he released it to the world in his book, Unua Libro, that was printed in the year 1887.  His intent was that Esperanto should become the world’s major second language, and thus multitudes of people with a myriad of primary languages would be able to intercommunicate with comfort and ease.
The Esperanto language is said to be very easy to learn, and in fact linguists state that it can be mastered in the shortest amount of time for any language upon the Earth.  Esperanto is totally regular in all of its grammatical forms, and it is very flexible in its build up of terminology.  The entire grammar structure can be learned in one lesson.

According to Wikipedia: There are some two million people who have varying degrees of proficiency in the language, including up to two thousand people for whom Esperanto is their mother tongue, having learned it in their childhood home.  Esperantists are found in some 120 countries and its highest volume of usage is found in Europe, Eastern Asia and South America.
The first international congress of Esperanto speakers was held in Boulogne-sur-Mer in France in 1905, and since then there has been an international Esperanto Congress somewhere every year, except during the years of World War 1 and World War 2.  These major annual events attract many participants from throughout the world, usually around 2,000, though on one occasion the attendance reached as high as 6,000.

Interestingly, three different micronations have considered the usage of Esperanto as their national language.  The territory of Neutral Moresnet is a slice of territory at 1½ square miles lying between Belgium and Germany.  Due to anomalies in political history, Moresnet retained some form of neutral independence for more a century, running from 1816 to 1920.  As part of its move for continued independence back in the early 1900s, Moresnet considered adopting Esperanto as its national language.  (Much of the territory of Moresnet has subsequently been incorporated into neighboring Belgium.)

Two other micronations, far less real than Moresnet, considered adopting Esperanto as the national language.  These micronations were Rose Island off the east coast of Italy, and Molossia in the American state of Nevada.

Rose Island was a manmade platform in the Adriatic Sea back half a century ago and it supported tourist enterprises, such as a restaurant, a post office and apparently also a radio station.
Molossia was a small farm of 1½ acres near Dayton in Nevada which together with the farm house, was declared independent as a micronation, also half a century ago.  The supposedly national language for both of these tourist ventures, Rose Island and Molossia, was Esperanto.
According to statistics recently released by Duolingo, currently a million people are studying

Esperanto on their language instruction website.  The Google translation site has also added Esperanto to their list of translation capabilities.  Another report states that more than 75 universities in more than 25 countries have at some time given instruction in Esperanto.
Esperanto is currently the language of instruction at the International Academy of Sciences in San Marino, Italy; Vatican Radio uses Esperanto on its website; the United States army published a phrase book for its soldiers in Esperanto in the 1950s; in the summer of 1924, the American Radio Relay League adopted Esperanto as its official international auxiliary language; and over the years, several shortwave stations have inserted Esperanto programming into their scheduling.
Back in the early days of radio, a week long series of International Radio Broadcast Tests was conducted with the participation of many prominent stations in North America and Europe.  These international test broadcasts began on November 24, 1924, when ten stations in the United States and Canada presented programming in Esperanto.

In 1934, the radio station VN at La Doua-Lyons in France with 1½ kW on 644 kHz conducted a listener contest with seven people from different national backgrounds, all speaking in Esperanto in the same radio program.  The 1949 edition of the World Radio Handbook gave a list of some of the radio stations in Europe with programming in Esperanto.

A quick search on the internet reveals that several international shortwave stations are these days on the air in the Esperanto language.  These stations include: Radio Polonia in Warsaw Poland, China Radio International, Radio Havana Cuba, Vatican Radio, and RAI in Rome Italy.  Radio Polonia, in the country where Esperanto as an international second language was launched (Poland), states that over the years they have broadcast more than 25,000 programs in Esperanto.
On the radio scene, Muzaiko is a 24 hour internet radio stream in Esperanto, with some English inserts.  Their website is muzaiko.info.

QOTW163 QSL of the Week: QSL Card printed in the Esperanto Language


Back a decade or so ago, there was an amateur DXpedition to the North African exclave of Melilla, a small Spanish settlement measuring less than five square miles, at the Mediterranean edge of North Africa.  This territory has been allotted the amateur callsign prefix EA9.  Their QSL card shows a photograph in color of old historic buildings, and the language on the card is the international auxiliary language Esperanto.
(AWR-Wavescan/NWS 442)
at 9:19 AM