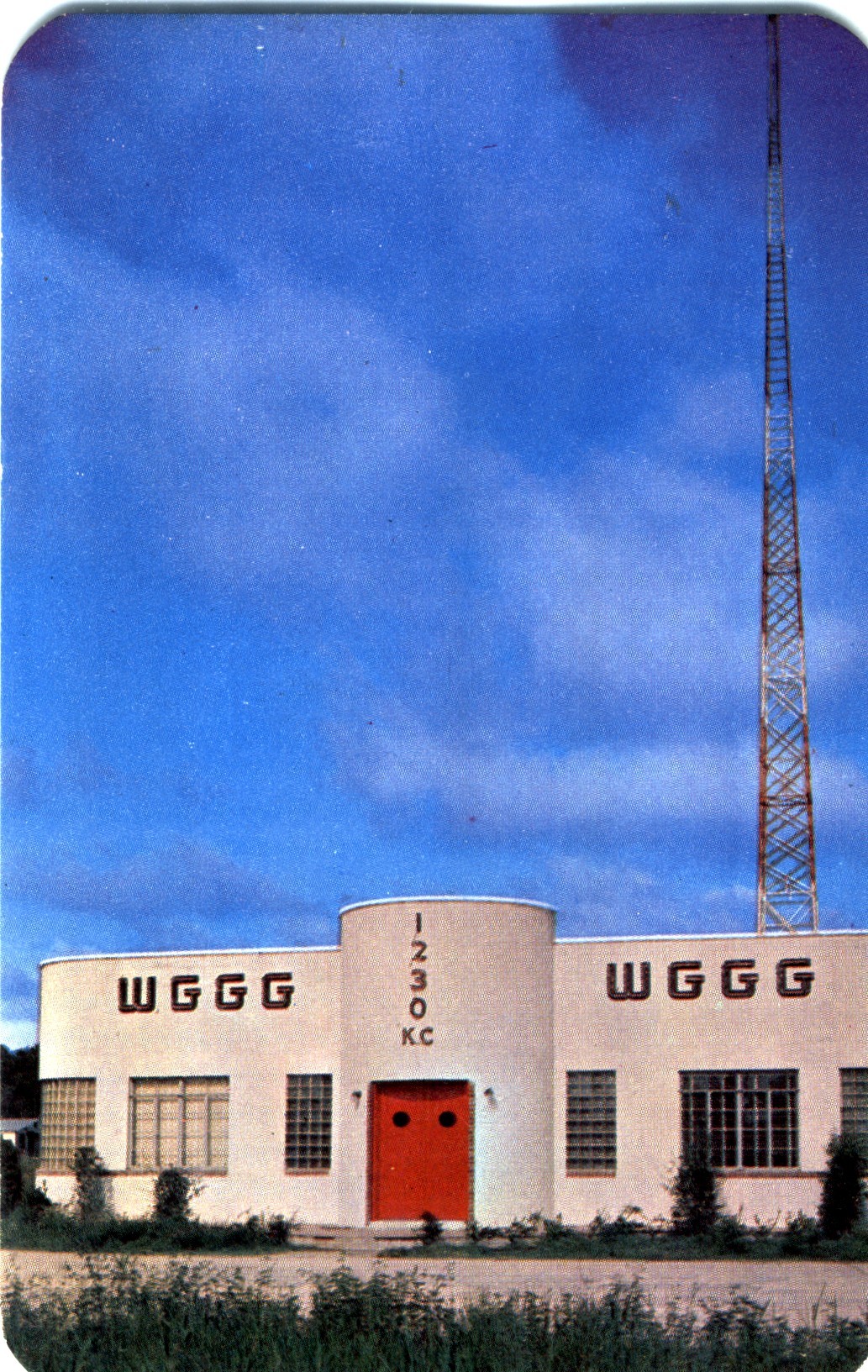 Surprisingly, there are numerous abandoned radio broadcasting stations that can be seen, and explored, in many different countries around the world.  The owners of these various abandoned radio broadcasting stations have simply closed their station and walked away from it, leaving it just as it was. These many abandoned radio stations are currently in various stages of decay and deterioration; you can see them on the internet, and if you live nearby, perhaps you can visit one or two of them, and explore them and photograph them.  From the internet, we list several of these abandoned radio stations in the United States, AM medium wave and FM, and we take them in alphabetic order of the state in which they are located.


First up is Alabama, and we view an abandoned radio station somewhere in the vicinity of the large country town of Cullman, which is located approximately half way between Huntsville and Birmingham.  The visitor to this abandoned radio station, who does not seem to be identified, likewise asked that the callsign and location of this station not be identified either.


The abandoned radio station in Vincent was a community radio station with compact studios, offices and transmitter all at the same two story site.  This station is in plain view of many commercial businesses though its surrounding land area is completely overgrown, so much so that it is difficult to gain access to the building itself.


At the time of the visit, the front door was wide open, and the entryway revealed rotten wood and wet carpet, together with the stench of mold.  Apparently this building was a private house that had been converted into a radio station somewhere around the middle of last century.


Old style music records were strewn around the floor, the station callsign could still be read on the wall, the interior corridor was unsafe to traverse, and it seemed like a fire had burned out the transmitter many years ago.  The date on the fire extinguisher inspection card showed September 25, 1992.


At the back of the building was a spiraling staircase that led to the top floor wherein was a kitchenette.  The flooring above the fire damaged area below had collapsed long ago.  The view of the station property from this second floor location showed everything abandoned, overgrown and uncared for.


We leave this unidentified site in Alabama, and we move on to Florida, to what was medium wave station WGGG with 100 watts on 1230 kHz in Gainesville, a university city in the northern  area of the state.  Radio station WGGG was built back in 1946, with the production studios in the center of the building, completely surrounded by a corridor in an endeavor to reduce unwanted noise from the railway line across the street, and from aircraft at the nearby airport.


Station WGGG, changed ownership many times, and it was sold in 1984 to new owners, who transferred the facility to another location, and abandoned the historic building at 1230 Waldo Road.  As would be expected, the building has been seriously vandalized over the years.


The third state we visit in our program today is Illinois, and in the regional city of Clinton lies the abandoned facility that was at one time station WHOW with 1 kW on 1520 kHz.  The town of Clinton is located in the very center of the state of Illinois and it was named for a governor of the state of New York back in the early 1800s, not for a president of the United States in more recent time.


In 1972, the studios for medium wave WHOW were transferred from their downtown location into what became known as the Old Red Barn on the outskirts of the small city.  As the years went by, the station was never modernized nor upgraded, and it was finally closed and abandoned as was in 2002.  As would be expected, the clock on the wall is no longer functioning.


The fourth state we visit is Montana, where station KPRK was inaugurated on January 9, 1947 with 1 kW on 1340 kHz.  This station was located in a very ornate building on the edge of Livingston that is to this day listed on the National Register of Historic Places.  Surprisingly, recent photos of this abandoned medium wave station KPRK show that the building has not been vandalized and it appears to be still in its earlier pristine condition.


Next we go to New York state.  In 1948, mediumwave station WIBX was transferred from its original location at the U-bend of the Mohawk River at the end of Schuyler Street Utica in to a new location on Clark Mills Road.  At the same time, the station underwent a frequency change from 1230 kHz to 950 kHz, and the studios were transferred from the downtown First National Bank Building into the newly constructed station building.


In Tulsa Oklahoma, radio station KOME with 5 kW on 1300 kHz was abandoned towards the end of last century and likewise, this building was also cleaned out before the owners vacated it.  There is not much to be seen here, just empty rooms, and very little vandalism.


Surprisingly, we could go on, and mention so many other abandoned radio broadcasting stations in the United States.  In Shamokin Pennsylvania, the transmitter facility for medium wave station WISL was installed in an out of town junk yard, and the four towers still stand to this day.  Junk in the transmitter building is piled high in cardboard boxes.


Also in Pennsylvania was FM station WCHR 94.5 MHz at Yardley, just across the Delaware River from Trenton New Jersey.  This isolated station building was abandoned some twenty years ago, and overgrowth now reaches to the side of the building.


Then in Washington state, we visit in our program today another abandoned radio station, medium wave KXXR-KSVY at Opportunity.  The studios and offices were located at 44th Ave and South Havana St in Spokane, and the 1550 kHz transmitter was installed in a trailer at East Thorpe Road and Dishman Mica Road at Chester.  The radio station trailer in its swampy venue was abandoned in 1996 and for many years the electronic equipment was still visible in the dilapidated trailer, though the antenna towers were removed some time back.


The last abandoned radio station we visit in our program today is out of order alphabetically, and its story is a little different also.  The studios and offices for station WCOP AM-FM in Boston were previously located in a building in suburban Lexington, Massachusetts.  The studios have since gone, and that part of the building is empty.  However, the building still houses two active medium wave transmitters: Spanish language WWDJ Boston with 5 kW on 1150 kHz and ethnic station WAZN Watertown with 1400 watts day and 3400 watts at night on 1470 kHz.
(AWR-Wavescan)
(photo/WGGG Gainesville, FL via Central Florida Radio)
at 9:47 AM