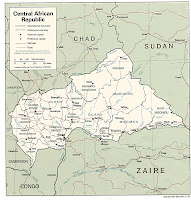 Imagine living in a country where you can't access the Internet, watch television, read newspapers or even receive mail. Except in Bangui, the capital city of the Central African Republic (C.A.R.), that's what life is like for most of the country's 4.5 million residents. Their lifeline to the rest of the world? Radio. People in C.AR., a country about the size of Texas, depend on radio broadcasts to keep informed. Almost every village has a radio, and some have more than one. The sets are affordable, costing as little as US$6, usually coming from countries such as Nigeria and Niger. The radios typically have FM, shortwave and medium-wave bands.

Until 2005 there were only six private FM stations and one governmental shortwave station in this country where villagers have a life expectancy of just 44 years. It was then that Integrated Community Development International (ICDI), a partner of HCJB Global, was granted permission to open the country's first privately owned shortwave radio station, Radio ICDI.

In early 2006 the ministry acquired an eight-acre tract of land on the plateau above the town of Boali. A road to the transmitter site was built, and electricity was installed. Equipment was transported in large shipping containers, and eventually one of the 20-foot-long metal containers was converted into a studio and transmitter building.A year later a team from
HCJB Global Technology Center in Elkhart, Ind., spent three weeks at the broadcast site, installed the first shortwave radio station. They also put in two satellite downlinks that provided access to the Internet and made it possible to receive French-language Christian programming from Trans World Radio, another HCJB Global partner.

Last month HCJB Global engineers returned to C.A.R. to put in two additional regional shortwave radio stations in Boali, similar to the station installed in 2007. One of the new stations will help extend the broadcast hours of the existing ICDI station into the nighttime. Each station only works well during a portion of each day because of how shortwave signals travel through
the atmosphere.

Curt Bender, manager of broadcast services at HCJB Global in Elkhart, said, "I want to give the Lord recognition for sustaining our team through two difficult installations in the past three years and to praise Him for the success."