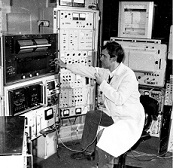 Have your white laboratory coats ready, because VOA Radiogram will be very experimental this weekend.

Battle of the 55-wpm modes.  VOA Radiogram listener and contributor Mark Hirst in the UK suggests an experiment with the BPSK63F mode. His interest was generated by an article in the August QST magazine about the "flavors of PSK." It noted that BPSK63F, with its forward error correction,  has a "remarkable ability to be decoded under poor conditions."

During the early editions of VOA Radiogram, we did transmit BPSK63F a few times. This weekend, we'll do it again, in comparison with two other modes that also have speeds of about 55 words per minute: MFSK16 and Olivia 8-1000.  The RSID for each mode will be followed by a 15-second tuning signal, in case you must manually change modes. More details below in the lineup.

The return of Flmsg.  This weekend's program will include on item in Flmsg format. Flmsg is an add-on to Fldigi that allows the transmission and reception of message forms and formatted html documents.

To make Flmsg work with Fldigi, in Fldigi: Configure > Misc > NBEMS > under Reception of flmsg files, select Open with flmsg and Open in browser, and below that indicate where your Flmsg.exe file is located – probably somewhere in Program Files(x86).

If all goes well, when the digital mode transmission concludes, Flmsg will open a new window of your web browser to display a formatted VOA Radiogram transmission schedule. If your default browser is not open, Flmsg will open it for you. (If you are asked to ignore checksum error, select Yes.)

If it doesn’t work the first time, or you don’t have Flmsg installed, you can try this later from your recording.

In Windows, an easy way to save the received document is to use the Microsoft Snipping Tool. Please send that image as an attachment to your reception report.

If you are an Android user, TIVAR does not accommodate Flmsg files. But a similar app, AndFlmsg, as its name would indicate, does. Unlike TIVAR, which is receive-only, AndFlmsg encodes as well as decodes and is used by radio amateurs for message traffic. After the Flmsg is received, go to the index screen and press on the name of the file.

The Mighty KBC will also transmit Flmsg. This will be during its broadcasting to North America, Sunday 0000 to 0200 UTC (Saturday 8-10 pm EDT), on 9925 kHz, via Germany. A minute of MFSK32, in Flmsg format, will be at will broadcast at 0131 UTC. Please send reports for this KBC reception to Eric: themightykbc@gmail.com .


DigiDX will provide DX and media news in MFSK32 and a mixture of other modes:

Thank you for your reception reports for last weekend's VOA Radiogram. Reception conditions were generally good, although propagation Saturday at 1600-1630 UTC on 17580 varied widely in different parts of the world. I will try to respond to as many reports as possible before the weekend is over.
I hope you can tune in and write in this weekend.
Kim Andrew Elliott
Producer and Presenter
VOA Radiogram
voaradiogram.net
Twitter: @VOARadiogram