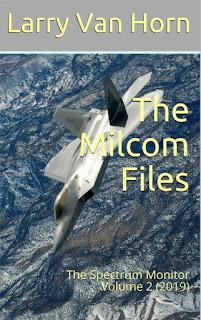 The Teak Publishing Company is pleased to announce the release of its latest eBook in the Milcom Archive series – The Spectrum Monitor Volume 2 (2019) by Larry Van Horn.

Some of the topics covered in this new book during 2019 include:

The latest Milcom Files - TSM Milcom edition eBook is available now on Amazon at https://www.amazon.com/Milcom-Files-Spectrum-Monitor-ebook/dp/B084GT5J7C/ for US$4.99.

All his early MT columns have been published in two eBooks. The first two books in the Milcom Files series cover his columns published in Monitoring Times and are available at Amazon.

In 2017 Larry joined the Spectrum Monitor writing staff to continue his efforts to chronicle military communications in a new monthly TSM Milcom column.

His first TSM Milcom Archive eBook, the third book of the Milcom Archive series was published at Amazon in May 2019 and is available at https://www.amazon.com/Milcom-Files-Spectrum-Monitor-2017-2018-ebook/dp/B07RN1ZGLJ/ for US$4.99. 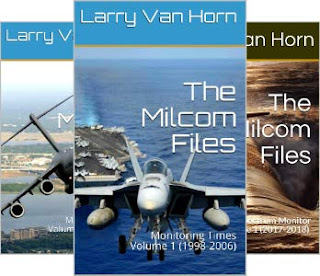 Given recent international events and natural disasters, most radio listeners quickly learn that when the world is in crisis the military will usually be the first organization called upon to intervene. It pays to monitor military frequencies when international events heat up. Monitoring the military can offer some of the most productive and rewarding listening you will ever experience using your radio. The good news is you do not have to live close to a military installation to hear these communications. But you do need to learn where and when to tune in military communications.

Mention the words "Monitor the Military" and most radio hobbyists will immediately think of military air shows, military aircraft flybys or a whole host of other activities that can be heard via radio frequencies. There is a big radio frequency spectrum out there to monitor but if you know where to listen, and some cases when to listen, you can eavesdrop on some of the most fascinating radio communications you will ever hear on a scanner or shortwave radio.

If you are interested in monitoring military communications, own a scanner, shortwave radio, or have an Internet connection for web software-defined radio (SDR) monitoring, the Milcom Archive Files are a must reference on your radio shack shelf.

Larry Van Horn N5FPW, has been a radio hobbyist for more than 55 years listening to world events and monitoring military radio communications. He has spent over 33 years documenting activity in the military radio spectrum in his monthly Satellite, Utility World, and Milcom (Military Communications) columns in the pages of Monitoring Times, Satellite Times, and The Spectrum Monitor magazines. During this time, he has published a treasure trove of military communication monitoring information.

This book is being released internationally. Amazon customers in the United Kingdom, Germany, France Spain, Italy, Japan, India, Canada, Brazil, Mexico, and Australia can order the eBook from Amazon websites directly servicing these countries. All other countries can use the regular Amazon.com website.

You do not need to own a Kindle reader to read Amazon eBook publications. You can read any Kindle book with Amazon’s free reading apps. There are free Kindle reading apps for the Kindle Cloud Reader, Smartphones (iPhone, iTouch, Android, Windows Phone and Blackberry); computer platforms (Windows XP, Vista, 7 and 8 and Mac); Tablets (iPad, Android and Windows 8), and, of course, all the Kindle family of readers including the Kindle Fire series. A Kindle eBook allows you to buy your book once and read it anywhere. You can find additional details on these apps at this link on the Amazon website at www.amazon.com/gp/feature.html?ie=UTF8&amp;docId=1000493771.

For additional information on this and other Teak Publishing radio hobby books, monitor the company sponsored Internet blogs – The Military Monitoring Post (http://mt-milcom.blogspot.com/), The Btown Monitor Post (http://monitor-post.blogspot.com/) and The Shortwave Central (http://mt-shortwave.blogspot.com/) for availability of additional eBooks that are currently in production. Information on other publications by the author is available on the author’s page at Amazon http://www.amazon.com/-/e/B00G1QMO4C.