The Radio Scene on a Volcanic Island in the South Pacific: The recent tragecdy on New Zealand's White Island 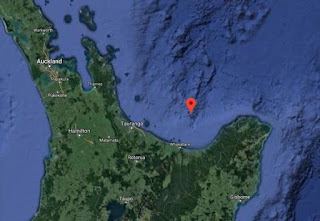 People around the world have been saddened by the news of several tragic deaths as a result  of a sudden volcanic eruption on White Island off the coast of New Zealand.  The White Island volcano erupted suddenly and unexpectedly at 2:11 pm on Monday December 9 (2019), at a time when 47 tourists were making a tour of the island.

The uninhabited White Island is located in the wide Bay of Plenty, some 30 miles off the north east coast of the North Island of New Zealand.  It is a submarine volcano, rising a mile off the seafloor,  the top 1,000 feet of which is above sea level.

The island is roughly circular in shape with a total area of almost one square mile.  In the Maori language of New Zealand, White Island is known as Te Puia o Wakakaari), which can be translated into English as the Dramatic Volcano.
White Island was discovered by Captain James Cook aboard his good ship HMS Endeavour on October 1, 1769.  He named the island White due to the intensive cloud of white steam emanating from the island, though he did not specifically state that the island was actually an active volcano.

The island has never had a permanent population, and there is little vegetation on the island.  Even the scrubby vegetation is diminishing due to the effects of volcanic activity.  A population of Australasian Gannets was numbered five years ago at around 5,300 pairs, though this number has subsequently diminished due to the harsh life for the birds on this island.

In 1867, ownership of the island was granted to Retireti and his sister Katherine Simpkins who were the adult children of a Danish sailor and a high ranking Maori woman.  Ownership was passed on to the French born Judge John Wilson a few years later, and he began the commercial mining of the sulfur deposits in the mid 1880s.  This first era of sulfur mining on White Island ended in 1901.

A second era of sulfur mining on White Island began in 1913, but ended a year later when the collapse of the crater wall resulted in the death of ten miners.  Their bodies were never found.  The only survivor was a cat which was given the nickname Peter the Great.

There was a third era of sulfur mining on White Island and this began in 1923.  Workers were housed in temporary huts that were erected near the Gannet colony and they commuted daily by small boat, or if the sea was rough, by walking a narrow and rubbly pathway.  Heavy machinery aided the mining of the sulfur, but again the project was dropped ten years later due to the poor quality of mineral content.

In 1932, the island was bought by Auckland stockbroker George Buttle, and it has remained in the Buttle family ever since.  In 1953 the New Zealand government offered to buy the island, but the owners declined to accept, and instead the island has been declared a privately owned Scenic Reserve.  Tourism to this volcanic island is the only form of income, and each year some fifteen thousand or more tourists from all over the world come to see an active volcano close up, or to study its irregular history of volcanism, or to ponder over its nostalgic pioneer backgrounds.

At the time of its most recent dramatic and tragic eruption, 2:11 pm on Monday December 9 (2019), a total of 47 tourists and tour guide officials were at White Island.  Another small group were on board a tour boat near the island jetty.  They quickly went back to the island and rescued those who were already standing on the jetty and waiting.

Those who were nearby on the island were also rescued.  However, those who were further inland on the island perished in the cataclysm, and the helicopter that was on the ground was damaged beyond use.  An initial casualty list showed that 12 people survived unhurt, 30 were injured with superficial to serious burns, and 5 were confirmed as dead or missing.  These people were from New Zealand, Australia, United States, Germany, China, England and Malaysia.

The volcanic upheaval sent a plume of ash and smoke more than two miles into the sky, a sight that is visible from space.  Scientific personnel stated that the event created a local radio blackout that extended for four hours.

In spite of the paucity of human activity on the island, a small though important communication radio station was in use thereon.  During the third mining era running from 1923 to 1932, this radio communication station was registered with two very different though official consecutive callsigns.

In 1928, the allotted callsign was VMDJ, and strangely it was granted an operating frequency within the 80 metre amateur band.  A four letter callsign beginning with the two letters VM is reminiscent more of a station located on a South Pacific island rather than an official New Zealand location.

The subsequent callsign, shown in a 1933 list, was given as as ZLI.  A three letter callsign beginning with the two letters ZL indicated a communication station in New Zealand, and generally a station of significance.

In more recent years, a whole series of small automatic transmitters were installed at various locations around the volcano on White Island.  These small transmitters can be best described as being similar to the small automatic transmitters that are used to convey weather related information to a central location.  The small units located on White Island convey various aspects of information related to volcanic changes such as land movement, gases emitted, and temperature changes.
(AWR-Wavescan/NWS 568)
at 10:46 AM