The Radio Scene in Australia: The Great Australian Fires 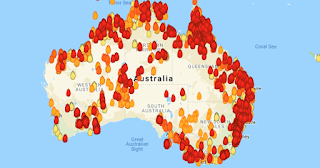 With all of the intense international interest in the Covid virus, and mass demonstrations, perhaps most people have forgotten that a few months ago in 2019, Australia suffered the worst bush fires in the entire history of this down under continent. We take a pause for a while from other matters of social interest, so that we can present at least some of the radio anecdotes and stories associated with the Australian fires.

A map of Australia showing every wild fire at the height of the summer season in Australia indicates that every state and almost every area was impacted with major fires.  In fact looking on the map there were so many fires, it would almost seem that the whole continent was on melt down. It is estimated that billions of animals died in the fires, millions of acres of land were burned, thousands of homes were destroyed, and many regional towns were without electricity and communications.

On many occasions, people living in fire threatened areas sat in their motor cars and listened to the emergency news coming from their local radio station.  There was panic buying of batteries for portable radios and flashlights, and also for milk and bread, and other needed food items.  Many stores had to manually register the usage of customer’s credit cards where the local electrical grid was down.

Throughout the time of the raging of these intense fire systems, the nationwide government mediumwave and FM radio networks (ABC local, regional, state and national), gave top priority to emergency fire news.  In each state capital city, one of the two ABC mediumwave stations was designated as the emergency news broadcaster, and in several instances local FM and mediumwave stations were programmed individually and in small networks with fire information.

In two states, New South Wales and Victoria, some of the ABC transmitter stations suffered fire damage and destruction, and in order to provide local communities with emergency information, the ABC programming was broadcast over a nearby undamaged commercial radio station.

As an example of competitive cooperation, the ABC TV and radio tower on the summit of Mt. Wandera at Bateman’s Bay, half way between Sydney and the state border with Victoria, was damaged by the intense heat from the fire on New Year’s Eve (2019).  The ABC was granted the use of the radio tower operated by the commercial Grant radio station, which incidentally operates on the unusual FM channel 87.6 MHz.  A temporary FM transmitter carried emergency news and information on behalf of the ABC.

In the national capital Canberra the bushfire smoke was so thick that the 7:00 pm ABC news bulletin was read by the staff outside the studio building.

In addition to the wide area radio coverage provided by the ABC and the commercial stations, numerous community stations also participated actively, some 80 of which were in fire ravaged areas.  Station 2EAR on 107.5 FM in the same Bateman’s Bay was destroyed on New Years Eve (2019) by the same fire.  Community station 1 WAY FM in Canberra was evacuated during the fires in that area.  Staff at many of the volunteer community stations admitted to exhaustion as a result of extended stints on duty.

In addition to the participation by all of these radio broadcasting stations (ABC, commercial and community), amateur radio operators were also actively involved.  Amateur radio networks provided emergency communications when the landline and mobile phone networks were down.  In the Bega area (coastal New South Wales near the border with Victoria), for example, a whole network of 30 amateur stations provided emergency communications.
(AWR-Wavescan/NWS 591)
at 10:32 AM