The Story of the Japanese Sea Monster and a radio station 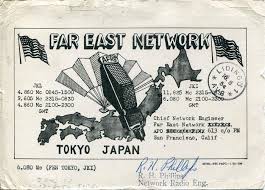 It was during the year 1947, that a radio station in Tokyo Japan broadcast a program about a fictitious huge Sea Monster that arose out of the ocean and slowly made its way towards Tokyo, devastating people and places in its onward progress.  So many listeners heard this strange broadcast that panic set in, and many phoned the station and public authorities in an endeavor to gain further information.

The radio station that carried this Sea Monster program was WVTR, which later became the key network station for FEN, the Far East Network, the American Forces Radio Network in Japan.  The studios for WVTR-FEN-AFRS were on the 3rd floor in the same building as the Japanese mediumwave station JOAK, at 2 2-Chome, Uchi Sai Waicho, Chiyo Daku, in Tokyo.  The main transmitter for JOAK-WVTR at that time was located out of town on Atago Hill and it radiated 50 kW on 590 kHz.

In addition to the JOAK-WVTR mediumwave transmitter, the Sea Monster programming was also relayed on shortwave via the NHK 5 kW transmitters located at Yamata and Nazaki.  However, this program was not on relay to other AFRS stations in Japan that were subsequently incorporated into the WVTR-FEN-AFRS network.  This is what happened.

On Thursday night May 29, 1947 the usual evening program was on the air from WVTR-JOAK, an entertaining program of relaxing American music.  Then soon after 7:00 pm, the music program was interrupted with a brief news item stating that some fishing boats were missing at sea off the coast of a small fishing village a little south of Yokosuka, on the western shore of Tokyo Bay.

A short time afterwards, a followup news report stated that a village in the same area had just been destroyed.  This information was followed shortly afterwards by another report that was phoned in by an eye witness who stated he had seen a huge Sea Monster, standing about 20 feet tall, that was moving inland and northward up the coast towards Tokyo.

And so, for the entire hour, brief moments of recorded music were interrupted by short news bulletins indicating that this horrible ogerish Sea Monster was on a relentless tirade of death and destruction as it moved towards Tokyo.  American amy units were called to the scene and they unsuccessfully attacked the monster, it was declared, with rifle fire and cannon fire, all of which was ineffective in halting the relentless stampede of this great beast.

The continuing series of supposedly on the spot news reports continued at a frantic pace, and they included the story of harrowing rescues and escapes by local citizens, reports via remote radio links, the noisy movement of heavy army equipment and tanks, terrifying roaring and screaming from panic stricken humans and animals, and all else that would add reality to this vivid radio presentation.

As this rampaging beast from the ocean continued on its progress towards Tokyo, additional live reports indicated that further attempts by army units to head off this horrendous animal in its relentless pathway of destruction, with flame-throwers, tear gas, and hand grades all proved to be futile.  Additional news reports indicated that the Sea Monster had derailed a railway train and destroyed tall buildings, and that it was proceeding towards Tokyo along the main highway running from Yokohama.

Throughout the capital city regional area, listeners began a real panic.  They were urged to seek safety, to barricade themselves inside their homes and strong buildings, and as a result they tried phoning friends and families and authorities.  A senior army officer left a formal dinner party and loaded up three trucks of personnel and drove off to escape the approaching carnage.

American military police were put on alert, and Japanese police were ordered to stand by in readiness to fight the monster.  One American soldier phoned in, stating that he himself had seen the monster and he described it as a horrifying, thick-skinned creature that grinned in an oily and slimy manner.

Finally, as this giant mythical monster was nearing Tokyo, one of the announcers at AFRS WVTR, Corporal James Carnahan from Chicago, announced that he would go out and meet this vicious monster from the sea.  As he did so, the great beast turned and then it addressed all of the listeners in English, and it congratulated WVTR-AFRTS-FEN on the occasion of its Fifth Anniversary.

So many listeners attempted to phone wherever they needed to, that it tied up the radio station’s phone system, and another report states that the overused and overheated telephone exchange in Tokyo simply blew up.  Next day, English language newspapers in Japan, and in the United States and elsewhere, printed brief reports about the radio program that presented the story of the mythical Japanese Sea Monster and its attack on Tokyo.

It was subsequently discovered that the American army authorities were not amused with the radio prank about the Japanese Sea Monster.  As an aftermath, it was stated that the commander of the Eighth Army, General Eichleburger was on vacation in the area of the advancing mythical monster, and that he also was not amused.  In addition, General Douglas MacArthur likewise heard the dramatic radio broadcast, and behind the scenes he attended to the aftermath of this mythical situation.

Soon afterwards, four of the top staff at WVTR Tokyo were transferred elsewhere.  All four were from California; Dr. Wilson W. Cook, Corporal Arthur Bartick and Private Arthur Thomson, each from Los Angeles, and Private Pierre Myers of Hollywood.  Three of these men were reappointed to the FEN network stations in South Korea.

Interestingly since the mid 1800s, the legend of a Sea Monster has begun to grow in the mythical concepts of Japanese society.  That older Japanese Sea Monster was called Amabie which no doubt is what also led to the development of the first Godzilla film in 1954 and the massive movie, video game, comic book  and TV franchise that followed.
(AWR/Wavescan-NWS 5995)
(photo-HCDX)
at 8:00 AM