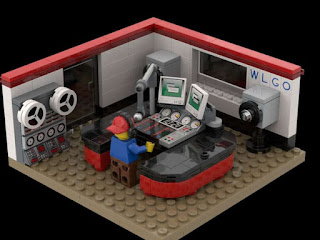 Back in July, we presented a story here in Wavescan about a teenager in Iceland who built a large scale model of the famous though tragic passenger liner, the RMS Titanic with the use 56,000 Lego bricks. We go now to another story, this time about the planned usage of Lego bricks for the construction of a projected model radio station with the very appropriate callsign WLGO.

The August 14 (2019) issue of the American trade journal, Radio World, presents a feature article under the title, What Do You get When You Combine Legos and Radio? which was written by frequent contributor Dan Slentz. An internet search produced some very interesting additional information.

This is the story...

Matthew Maneely serves as the Operations Manager with the Gospel music station WICY (1490 kHz AM and 102.7 MHz FM) in Malone New York.  As a kid, he grew up with the popular building toys of that era, Lincoln Logs and Erector Sets. In addition, his grandfather and other family members were actively involved in the radio scene during that era.  His own children are into model building with the now familiar Lego bricks.

Every year, Lego produces 19 billion individual pieces, and over the years it has launched somewhere around 12,000 specialized kit sets, yet there is no kit set for the construction of a Lego radio station.  Matt Maneely decided to challenge Lego to produce a radio station kit set, as an encouragement for children to later consider a career in radio.

As the first step in this procedure, Matt Maneely designed his own model radio station using the Lego Digital Designer Software and he submitted the design to Lego in Denmark. Lego replied by stating that if 10,000 people would respond, then they would produce the pieces for a model radio station.  The needed worldwide impetus is still underway.

The radio station callsign that Matt Maneely gives to his computer designed Lego radio station is appropriately WLGO. Although there is currently no licensed radio broadcasting station on the air in the United States under the callsign WLGO, at one stage, there was.

Back in the year 1983, radio station WXAX was launched in Lexington South Carolina on 1170 kHz, with 10 kW by day and 2½ kW by night.  The format was country music. Five years later, the callsign was changed to WLGO and the format was changed to adult contemporary, though a few years later again, a new Christian religious format was introduced. In 2005 the station was sold to Spanish interests who changed the callsign to WQVA.  Then give five more years and the call was changed again, this time to WDEK with an oldies format.

Thus, Matt Meneely’s Lego callsign WLGO was in use as the FCC approved callsign for the 1170 kHz mediumwave station in Lexington, South Carolina for a period of some 17 years, with at first an adult contemporary format and then a religious format.
(Adrian Peterson-AWR Wavescan-NWS 553)