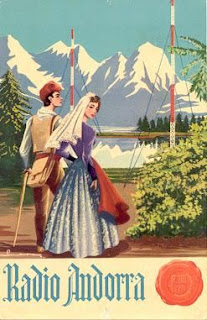 That small country was Andorra in the Pyrenees Mountains between France and Spain, and the two large radio stations were Radio Andorra and Sud Radio. On this occasion here in Wavescan, we examine the long, convoluted and interesting history of the large radio station in Andorra that was known best under its third title, Sud Radio. Both stations, Radio Andorra and Sud Radio, were large scale commercial operations with huge audiences in France and Spain and beyond, as well as in Andorra itself, though neither station was a financial success. Generally speaking, Radio Andorra was Spanish oriented, and Sud Radio was French oriented. There was strong competition between the two stations, for listeners as well as for advertisers, though there were a few occasions when a touch of co-operation might have been advantageous to them both.

Actually, Sud Radio in Andorra began as an organization in 1951 under the legal name Andorradio, though this title was very confusing due to the similarity in name with the already established, 12 year old Radio Andorra.  The new Andorradio/Sud Radio was established in Andorra in an attempt to circumvent radio regulations in France itself, which back then prohibited the operation of commercial and private radio stations.

As such its main competitors were Radio Monte Carlo, Radio Luxembourg, and Europe No. 1 from the Saarland in Germany. Radio Monte Carlo of course had a strong signal on 205 metres (1463 kHz) mediumwave but all three stations operated very high powered transmitters on longwave which pretty much blanketed the country.  Androrradio/Sud Radio was therefore very much the weakest of the four French competitors.

Within the first four years of its operation in Andorra, the offices and studios for the new Sud Radio were located in three consecutive though nearby locations, each on Galeries Merritxell (Merritxell Avenue) in Encamp. Interestingly, each of these three locations was also quite close to the two operational buildings in use by the original Radio Andorra.

The first of the three consecutive studio/office locations for Sud Radio was listed simply as Encamp; the second location was in Casa Filipo; and the third was at 7 Avenida Merritxell. At that stage, their postal address was interestingly Post Office Box 7, Andorra la Vella.

Preliminary test broadcasts from Andorradio/Sud Radio were noted in 1954, though the station was not officially inaugurated until four years later, on September 18, 1958. Two transmitters were on the air at that stage; a 100 kW Thomson transmitter on mediumwave 1485 kHz, and a 1 kW on a shortwave channel apparently somewhere around 6 MHz.  There were lengthy occasions when the shortwave transmitter was listed as silent.

The initial location for both transmitters for Sud Radio, mediumwave and shortwave, was adjacent to the studio locations in the valley at Encamp which was almost completely surrounded by high mountains. Mediumwave signals were radiated from a single mast supported by cables, and shortwave signals were radiated from another though quite simple antenna system. Propagation results from this mountain enclosed location (as would in reality be expected) were described as “disastrous.” That original transmitter location on Merritxell Avenue in Encamp was on the air for approximately 7 years, from 1958 to 1964.

It may be that the Andorradio frequency of 6305 kHz was simply the first harmonic of a slightly mis-tuned fundamental frequency of 3145 kHz.  Mathematically, 3145 kHz x 2 = 6290 kHz, just 15 kHz lower than where they were actually heard. On March 29, 1961, the Andorra government signed legislation that approved a 20 year period of operation for both radio stations, Radio Andorra and Andorradio/Sud Radio.  Because of the similarity in name for the two large radio stations, Radio Andorra and Andorradio, and the obviously resultant confusion, the name for Andorradio was officially changed at that stage in French to Radio des Vallees d’Andorrre, that is, Radio of the Andorra Valleys.

Radio Andorra of the Valleys, station announcement on 818 kHz

In 1963, there was an intent to increase the power at Radio of the Andorra Valleys on shortwave from 1 kW to 10 kW.  However during that era, FM broadcasting was gaining popularity worldwide, so instead of remaining on shortwave, this station went to FM, both in Andorra itself, and soon afterwards within France also.

In an endeavor to improve the mediumwave coverage area for Sud Radio, a new location was sought, and an isolated area on the summit of Pic Blanc, White Peak, close to Andorra’s eastern border with France, was finally chosen.  The program feed from the downtown studios to the isolated country transmitters was accomplished by an underground cable as well as by a microwave radio link.

The new transmitter station at Pic Blanc was taken into service in 1964, with a 300 kW Thomson transmitter on 818 kHz. Soon afterwards, the original 100 kW transmitter at Encamp was removed and reinstalled at Pic Blanc, and there was an attempt to combine the output of both transmitters in order to increase the international coverage from Sud Radio.

On October 23, 1967, the famous World War 2 French leader General Charles de Gaulle (as President of France at that time) made a visit to the Pic Blanc transmitter station while on a state visit to Andorra. It was during this era that Radio des Vallees d’Andorrre, that is, Radio of the Andorra Valleys officially became Sud Radio, South Radio.  Give a few more years (1972) and another Thomson mediumwave transmitter, rated at 600 kW, was installed thus permitting a combined output power of 900 kW.

The 20 year period for the licenses of both Radio Andorra and Sud Radio was coming to an end during the year 1981.  Both stations needed a license renewal; but instead, they were both surreptitiously closed, in an edict promulgated by the Council of the Valleys, the Andorran version of federal parliament.

It was on Thursday April 2, 1981 soon after 1900 UTC that both Radio Andorra and Sud Radio were closed. One of the main problems, though by no means the only problem, was that the two large radio stations were serving an international audience with their radio programming, with very little programming intended for local coverage within Andorra itself.

Interestingly four days later, Sud Radio was again on the air in Andorra, though by that time additional production studios were already in use in France itself. Then on November 24, (1981) the French government extended the license for Sud Radio in Andorra due to the nationwide elections in France.

In March 1983, the Pic Blanc transmitters were noted on air again, and the station remained in spasmodic service for apparently another four years.  In 1987, the station was finally silenced, and partially dismantled, though by this time, Sud Radio was on the air via a small network of stations within France itself.

Since then, Radio Catalunya in nearby Spain requested usage of the Pic Blanc transmitter site in 2004, though this request was never granted. A subsequent suggestion has been to turn the mountain top building into a snow sports stadium, though this concept has not yet been fulfilled either.  Currently guided tours take visitors through the station, and much of the electronic equipment is still installed, but certainly not all.
Next time: The Radio Wars in Andorra
(Adrian Peterson-AWR Wavescan/NWS 552)