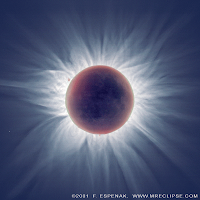 A Total Solar Eclipse will be visible in India on July 22, 2009 from early morning 05:28 hrs to 07:40 hrs IST (0000-0210 UTC). It will last for nearly four minutes - from 6.26 am to 6.30 am in India when the sun will not be visible at all. After almost 10 years we have an opportunity of witnessing a total solar eclipse from India, the upcoming solar eclipse will be longest total solar eclipse till 2114. According to NASA, the solar eclipse on July 22, 2009 is a 'Total Solar Eclipse' and the Moon's umbral shadow on Sun begins in India and crosses through Nepal, Bangladesh, Bhutan, Myanmar, China and ends in the Pacific Ocean.

Total solar eclipses occurs when the Moon comes between the Earth and the Sun, completely obscuring the solar disk for a few minutes. The eclipse follows a West-to-East track that lasts several hours until the alignment ends.

The total solar eclipse in India will be visible from many cities of India like Surat, Vadodara, Indore, Bhopal, Jabalpur, Allahabad, Varanasi, Patna and Siliguri. Majority of the regions in India will not have a view of the Total solar eclipse. As per NASA data, it will be a partial eclipse in Mumbai, Pune, Hyderabad, Bangalore, Ahmedabad, Delhi, Kolkata and Chennai.

Solar eclipses have been always been of special interest to Dxers and can provide propagation enhancement on lower frequency bands, also of interest will be to monitor MW band. It will be interesting to check the lower bands as the eclipse progresses due to dip in the D layer ionization bringing typical nighttime propagation conditions. It will be also of curiosity of dxers to make observations of propagation conditions just before, during and after the eclipse. There has been some excellent and unusual reception during past eclipses.

Here's a collection of articles on "dxing during solar eclipse" published in the newsletter of "Indian DX Club Intl" during Feb-May 1980, courtes veteran dxer Sudipto Ghose of Kolkata: http://alokeshgupta.googlepages.com/solar_eclipse.pdf

A press release from Indian Meteorological Dept which contains the timings
of total solar eclipse at different Indian cities:http://www.imd.gov.in/doc/solar.pdf
(Alokesh Gupta-IND via DXindia July 13 )
at 7:02 PM