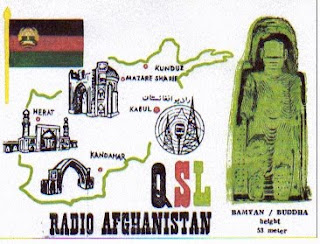 The Final Episode in the Story of Radio Broadcasting in Afghanistan

The Story of the Indian Shortwave Transmitter

In the long and interesting story of radio broadcasting in the land locked western Asian country of Afghanistan, we come now to the final episode: The Story of the Indian Shortwave Transmitter.
Back in the much happier days, their first shortwave transmitter was activated at Yakatut, on the eastern edge of Kabul in Afghanistan.  The original complement of shortwave transmitters at this location were German made units, 1 @ 10 kW, and 2 @ 25 kW with combined output at 50 kW.  These were inaugurated progressively in the late 1950's for national and international coverage.
In August 1966, an additional 100 kW Siemens transmitter was installed; and then 10 years later, 5 replacement transmitters were installed, 3 @ 50 kW & 2 @ 10 kW.  However, much of this equipment was destroyed at the time of the Russian invasion in 1979.
Then in May 1993, at least one of the shortwave transmitters was rejuvenated, though during the following year that also was damaged in further fighting.  One year later, a composite transmitter was assembled with the usage of available parts and this was activated on September 23, 1995.  At this stage, the main broadcasting channel was 7200 kHz.  However, on October 8, 2001, this unit was destroyed in an American air raid.
Almost immediately, a 100 kW Russian made R-118 unit was installed and this was activated in December in the 7 MHz band, though monitoring reports suggest that the power output was considerably less than the rated 100 kW.  At this stage, shortwave usage was very spasmodic.
In an endeavor to obtain wide national coverage on shortwave, USAID installed satellite equipment in Kabul, and in this way, programming was conveyed from the Kabul studios to transmitter bases in Russia, Austria, Norway and the United Arab Emirates.  These offsite relays of Kabul programming began in May 2002, though they were terminated in June of the following year.
At this stage, the Indian government granted a huge financial package for the restoration of Afghanistan, and this included a new shortwave station.  With this aid, the facility at Yakatut was rebuilt, and a 100 kW transmitter was installed, together with 7 antenna systems.
Initially, it was thought that the new transmitter would be an Indian made unit from BEL in Bangalore.  However, BBC Monitoring stated that this new transmitter provided by Indian Aid was a Thompson unit from France, and this fact was also confirmed by the well known international radio monitor, Jose Jacob VU2JOS in Hyderabad India.
Work on the revived shortwave facility at Yakatut began in February 2005, but progress was considerably delayed.  Even when the work was completed there was a further delay, awaiting the connection to the city power grid.
The new 100 kW shortwave service was officially inaugurated on July 30, 2011, and the first  published monitoring observation was from a listener in Russia who heard the station next day on 6100 kHz.  Two days after the official opening, the new station was noted by another well known international radio monitor, Victor Goonetilleke in Colombo Sri Lanka.
Last year’s World Radio TV Handbook listed the scheduling for just one hour a day, beginning at 1530 UTC on 6102 kHz.   However, according to many international radio monitors in several different countries, the operating frequency was changed at the beginning of the year to 7200 kHz.
But alas, the last known monitoring of Radio Afghanistan with its brand spanking new transmitter was in April last year, and apparently it is still off the air to this day.
It always seemed to be difficult to obtain a QSL card from Radio Afghanistan, yet there are multitudes of these cards in personal QSL collections throughout the world, and many are offered for sale on eBay.  The earliest known QSL card was printed in black ink on grey card.  That was in 1958, quite soon after their first shortwave transmitter was inaugurated.
The well known QSL card showing a map of Afghanistan in color, was first issued around the mid 1960s.  This card showed the large letters QSL, but no photo of the Bamiyan Buddhist statue, and at least 4 different printings are known.  However, the same card, with the Buddhist statue, came out about 10 years later.
In addition, during the 1970s and again in the early 1980s, Radio Afghanistan issued many different QSL cards depicting attractive tourist sites in color.
(AWR Wavescan/NWS 204 via Adrian Peterson)
at 10:57 AM