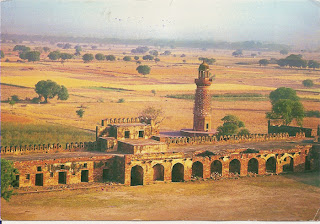 On this occasion here in Wavescan, we salute All India Radio on the 75th anniversary of the inauguration of their first shortwave network.  It was back in the year 1938, that four new shortwave transmitters were installed at key locations nearby to four major cities in India: Bombay, Delhi, Madras & Calcutta.
During the previous year 1937, a new shortwave transmitter, made by Philips in Holland model KVFH and rated at 10 - 12 kW, was installed and co-sited with the 1½ year old mediumwave unit VUD on Mall Road in Delhi.  At the time, the Delhi radio studios were located in a bungalow on Alipur Road.
Apparently this new shortwave transmitter in Delhi was accorded demonstration status, and thus three more were installed during the following year 1938, one in each of the other three major cities.
The first of these new 1938 10 kW transmitters, Philips KVFH, was inaugurated in Bombay as VUB2 on February 4.  This new shortwave unit was co-sited with their eleven year old mediumwave transmitter VUB at Malad, an outer suburban area between the airport and the ocean.  At the time, the Bombay studios were located on Queens Road.
The second new 10 kW shortwave transmitter for the year 1938 was installed at Avadi in suburban Madras with the studios at Mylapore, a suburb that is associated with the history of St. Thomas of ancient Bible times.  Both the mediumwave unit VUM at ¼ kW and the shortwave VUM2 were inaugurated on the same day, June 16.
The third of these new 10 kW shortwave stations was installed in Calcutta with the eleven year old mediumwave station VUC.  Shortwave VUC2 was taken into service on August 16.
It should also be mentioned that an additional 5 kW shortwave transmitter was installed at Delhi and this was inaugurated on June 1.
Each of the four transmitters in this new shortwave network relayed the programming from its parent mediumwave station, and each was intended to increase the service area beyond the regular coverage of the mediumwave unit.
However, these shortwave transmitters also enabled the major radio stations of All India Radio to take a relay of important programming from each other.  The first of these mutual inter-city relays by shortwave took place between Delhi & Bombay early in the New Year 1939, on January 18, though the procedure was soon expanded to encompass programming from other stations throughout India also.
That early shortwave network in India was established exactly 75 years ago.  Since then, Bombay has become Mumbai, Madras has become Chennai, Calcutta has become Kolkata, and program distribution is by satellite.
(AWR Wavescan/NWS 234 via Adrian Peterson)
(QSL via Gayle Van Horn/ISWBG)
at 7:20 PM