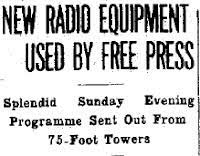 Special thanks to AWR Wavescan for sharing a recent program script
During the year 1922, there were two mediumwave radio broadcasting stations on the air in Winnipeg, Manitoba, and both were vying for the attention of the most listeners over the widest possible areas of Manitoba and neighboring Canadian and American territories.  These stations were CJCG operated by the Free Press, and CJNC operated by the Tribune, and both were losing money.
Both stations were quietly closed, after just less than a year of on air operation, with the final broadcast from the Tribune CJNC on Friday afternoon March 9, 1923, and the final broadcast from Free Press CJCG the next day, Saturday, March 10, (1923) at noon.  However, their death gave rise to the birth of of one of Canada's most notable callsigns, and also to the highest FM power ever permitted in North America.
Replacing the CJNC and CJCG callsigns was a new mediumwave station with the unusual though now well-known historical callsign, the three-letter CKY, the first usage of this new call.  The station was installed in the Government Telephone Building on Sherbrooke Street, a little south of Portage Avenue, with a flat top antenna on the roof.  Their 500 watt transmitter was manufactured by Northern Electric and their inaugural broadcast was a local staff presentation at 8:30 pm on Tuesday, March 13, 1923, just a few days after the close of the two earlier stations.
Interestingly during the following year 1924, came the appearance of Canada's first phantom radio broadcasting station, an additional callsign superimposed upon an already existing station.  The new additional call was CNRW operated by the Canadian National Railways System and it was noted over the new CKY in Winnipeg.  The income from the phantom broadcasts over the new CNRW-CKY enabled the Winnipeg station to survive financially.
In 1948, the original CKY was purchased by CRBC-CBC Radio in Canada, and it was rebranded as CBW.  Earlier this year, the original CKY-CBW, with 50 kW on 990 kHz was honored with a special historic display in the City Library, and with a series of programs and interviews over the modern and nowadays widely heard CBW.
The second usage of the famous historic callsign CKY was implemented on December 31, 1949, when Lloyd Moffatt reintroduced the callsign in Winnipeg for an AM station with 5 kW on 580 kHz.
Then in 1963, an FM outlet was appended to the CKY mediumwave station and this new transmitter was on the air with a fantastic one-third of a million watts, 360,000 watts, on 92.1 FM.  That overload of FM power is by far the highest power ever permitted on the FM band in North America,  though FM transmitters with 200 to 400 kW are still quite common in western Europe.
During the year 2004, CKY-FM moved to 102.3 FM, and the power level was reduced to 70,000 watts, still quite high. Two years ago, the callsign CKY was dropped and the station became KISS-FM.  Their studios are in Osbourne Village South in Winnipeg, and their transmitter is at Duff Roblin Provincial Park.
And that then is the story of one hundred years of historic radio broadcasting in Winnipeg Manitoba, an event that was honored appropriately throughout their city earlier this year.
(AWR/Wavescan 697)
at 9:31 AM