New country for shortwavers on the horizon ? 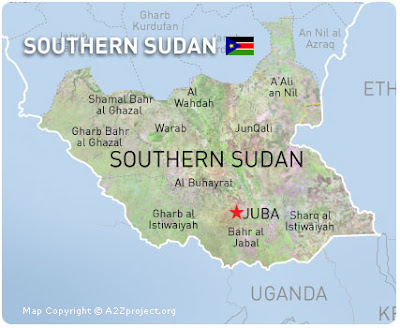 Republic of South Sudan
On July 09 this new state could celebrate its independence from the muslim government in Khartoum as agreed by both parties after two decades of civil war between Sudan and the Sudanese Peoples Liberation Army. At a voting in January 2011, 98,83% of the participating voters in South Sudan were in favour for independence. The area of South Sudan is 644.329 square kms – about one fourth of the Republic of Sudan – or the area of the United Kingdom, the Netherlands and Germany together! Its only 8,26 million inhabitants are mostly christians or animists.

The only known shortwave station in Southern Sudan has been Radio Peace which was a very small religious station owned and operated by Educational Media Corp. (EMC), in Spotsylvania, Virginia. Its station manager was Peter Stover who had about five employees. It was broadcasting from the Nuba Mountains with 4 kW on 5895 and 1 kW on 4750, but moved later to 4740 to avoid interference from Radio Dunamis, Uganda. But in Sep 2009 when it became evident, that the Nuba Mountains stay as a part of North Sudan, the station ceased operations and relocated to the future capital of South Sudan, Juba. It has not yet been heard by DX-ers. The best hours to try for it are at *0230-0415* and *1600-1800* UTC.(Ed)

EMC no longer owns this transmitter/equipment, it having been donated to the Episcopal Diocese in Juba. EMC spokesman indicated that he understood that the Episcopal bishop was attempting to get permission to return the shortwave station to the air. I have inquires out to Episcopal authorities in Sudan for details. (Jensen, Jul 11)

DX-ers are counting ”Radio Countries” in their QSL statistics and this new country has to be considered. (Ed)

The North American Shortwave Association (NASWA) Country List Committee has already considered this issue and has approved adding South Sudan (actual name will be decided when it actually occurs) as a new country, on the basis of Radio Peace operations. It will become effective when independence actually occurs on July 09...The UN practically was the midwife to this birth of a country. It has been de facto recognized by the UN, plus the US and most other major countries even before the official independence... It arrives on the scene fully recognized by the international community. .. With this background, the committee decided this was ample political recognition and that when South Sudan did declare independence, as anticipated, it should be added to the NASWA list. (Jensen, Jun 02 and 03, in DXplorer).

Thus we are now expecting, that the European DX Council will update its basic publication ”EDXC Radio Countries” at http://www.edxc.org/lists/200707edxc_landlist.pdf . (Ed)
(DX Window 432 via Anker Petersen)
at 9:33 AM