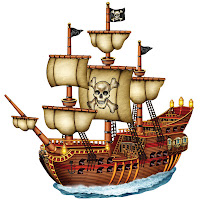 Thanks to the fine folks at Free Radio Weekly for sharing their recent pirate issue. Chased any pirates lately on shortwave ?

Captain Morgan
6925 AM, 0434-0437.* Tuned in to hear 'American Woman' followed by Twilight Zone Theme music prior to carrier being terminated. Fair.(D’Angelo-PA)

MAC Shortwave
6925 AM, 0130-0152. Tuned in to 'I Want to Rock n Roll All Night,' followed by youngster with macshortwave@yahoo.com and macshortwaveradio@gmail.com e-mail addresses plus talk about video game Zelda. Twisted Sister song at 0137. ID at 0141 “This is M-A-C”. More rock music. Youngster announcer mentioning this was The Ultra Man Show. Fair. (D’Angelo-PA)
(FRW 803)

Addtional pirate monitoring
Unid: 19020, 7/4, 1632- Marcel, a DXer from France, has occasionally reported a pirate here over the past year, but no one else has reported it. It has played a lot of American music, so his belief is that it’s an American pirate. He reported it on the FRN Grapevines on 7/4 and I heard it for the first time. I checked the Bedford, UK, web receiver and it was audible, but much stronger on my home receiver, often sitting around S6/S7. I heard three ballads with no announcements. The carrier stayed on for hours afterward but the programming ended at 1641. Other DXers around the US tuned in after 1641 UTC and reported hearing the strong carrier, but no audio. (Yoder,PA/Cumbre DX)

Unid: 18966.5, 7/5, 1847-2007* Tuned in, looking for Marcel’s 19020 mystery station. It wasn’t on, so I tuned down through the band, looking to see if any SWBC stations were using it and found this. Programming consisted of a variety of mostly adult contemporary-style ballads (and a couple of rock ballads) in non-English languages and no talk at all. Not sure, but I think that some of the ballads sounded Italian. Fair signal here; I checked the Bedford, UK, web receiver and the station was strong there (S7 or S8). Off immediately after a rockabilly song. The music was not unlike the songs that I heard the day before on 19020 kHz. Possibly an Italian pirate or private station testing? (Yoder,PA/Cumbre DX)
at 3:24 PM