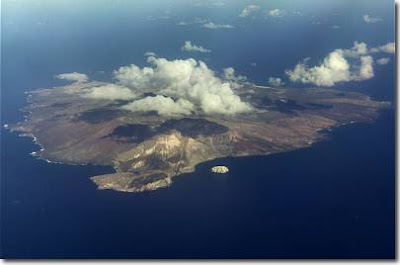 Ascension Island in the South Atlantic is about seven miles across and has a population of around 1800. The climate is quite equable and temperatures of 22 to 35 deg C and rainfall of around 300mm a year are normal. A constant sea breeze throughout the year keeps conditions cool. Most of the Island consists of volcanic ash or rock deposits. In the central high region there
is increased rainfall. The position of Ascension Island, 8 deg South and 14 deg West, makes it an ideal site for short save broadcasting to Africa and South America. Reversible antenna arrays allow coverage of Africa during the day and South America during the night.

Construction of the Atlantic Relay Station began in 1965 at English Bay and it became fully operational in late 1967. The Power Station was constructed to provide electricity for the transmitters as well for those on the Island. The Transmitting Station and Power Station provided employment for around twenty British and seventy St Helena staff with the BBC providing other essential services including the school, hospital and farm.

The transmitting station comprised of four Marconi BD272 250kW shortwave transmitters and twenty dual-band aerial arrays but was upgraded in 1989 by the installation of a further two Marconi BD272 transmitters and four new aerial arrays. The transmitters were designed in the early 1960's and required manual band changing and tuning round the clock by a staff of three
on each shift to carry out changes, tuning, routine maintenance and repairs. An automatic control system was installed to carry out all the transmitter program and aerial switching operations that were required by the daily transmission schedule. A 500 watt medium wave transmitter on 1485 kHz was added at the transmitting station and a 400 watt VHF transmitter on 93.2MHz was installed on Green Mountain.

Programming for the World Service originated from Bush House studios in London. These program feeds reached Ascension via the Intelsat 5 satellite via a Satellite Earth Station located close to the Transmitter Building which was installed in 1985. Prior to that a combination of pre-recorded tapes from London and shortwave radio links provided the necessary program
feeds. The Atlantic Relay Station at that time transmitted English to Africa, Central and South America; Somali and Swahili to Africa; as well as French, Hausa and Portuguese. A Receiving Station at Butt Crater three miles away equipped with six Racal dual-diversity receivers and two sets of rhombic aerials was automated in 1981 to allow full remote control from the
transmitter station. Later Butt Crater was used to provide emergency programme feeds in the event of a satellite link fault.

The original aerial field contained 20 aerial arrays supported by 10 masts which ranged between 46 and 99 metres high. Each of these arrays, many of which had automated groundwork switches, covered two adjacent shortwave bands and had a typical gain of 15 db. The masts were arranged to provide a range of forward bearings of 207 to 306 degrees and reverse bearings of 27 to 114 degrees. The four aerial arrays built in 1989 were supported by a
line of five self-supporting towers, the tallest being 126 metres high. Three of the aerials cover two SW bands and one covers three SW bands. Each of these newer aerials is reversible and can be slewed left and right giving a total of five possible forward bearings between 55 and 115 degrees and five possible reverse bearings between 235 and 295 degrees. The station
control system was capable of selecting any aerial to any sender as required by the transmission schedule. In practice each sender had a choice of ten different aerial arrays. The Atlantic Relay Station opening and closing announcements were inserted locally.