The Story of Radio Broadcasting in Sri Lanka 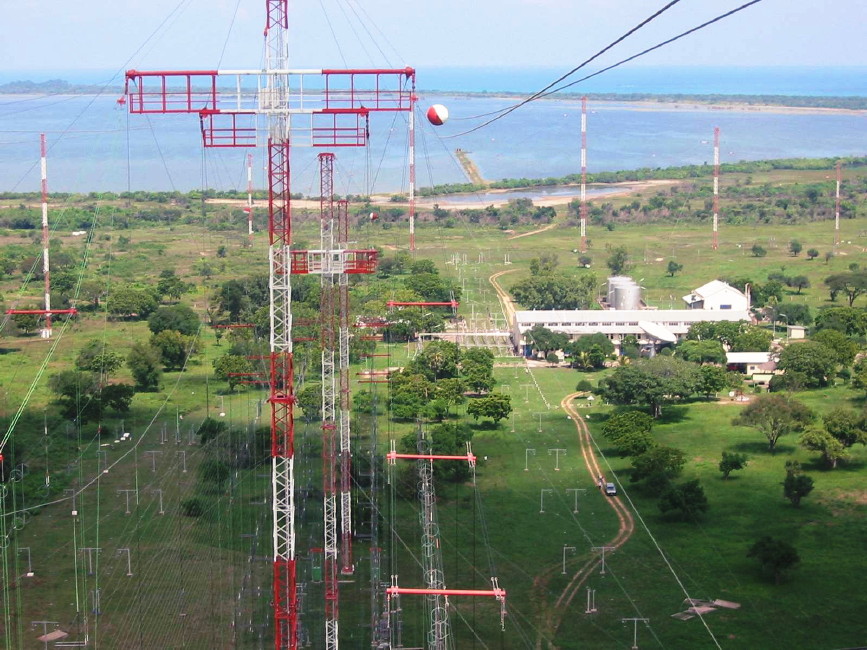 The picturesque and strategic harbor at Trincomalee is situated on the east coast of the island
of Sri Lanka, at around 1/3rd of the way down the total eastern coastline. The harbor is well attested in ancient times, and it was visited by the famous Italian explorer and traveler, Marco Polo, on his return visit from China in the year 1292.
The harbor was in use by the British Royal Navy as a submarine base during World War 2, acting as a guard point to the wide Bay of Bengal. There was also a British Royal Air Force base nearby.
On August 12, 1980, representatives from Deutsche Welle in Germany and the Sri Lanka Broadcasting Corporation in Colombo signed a mutual agreement, whereby a large radio broadcasting station, mediumwave & shortwave, would be constructed at the former Royal Navy Base, a dozen miles north of Trincomalee Harbor. This original agreement provided for one mediumwave transmitter at 600 kW, three shortwave transmitters at 250 kW, and one communication transmitter at 10 kW. An additional clause provided for a doubling of the station’s broadcasting equipment, if needed.
The Trincomalee site is located in the community of Perkara and it was originally under consideration for use by Trans World Radio TWR, though they subsequently preferred to build their station north of Colombo, near the west coast of the island. The original concept on the part of Deutsche Welle was that the large Trincomalee-Perkara relay station would be a joint project between Deutsche Welle in Germany & Radio Tehran in Iran.
Throughout the development of the station, progress always seemed to be somewhat slow, due to the isolation of the area, and at times also to the incursions of local insurgents. Construction work on the 242 acre site at Perkara began in October 1982. Some of the old colonial buildings from the British days were modified and updated for use by the station, and several buildings were constructed new.
Local wildlife also played its part at various times in causing disruption at the station, with occasional elephant herds breaking through the perimeter fencing and tramping through the property. Then again, there were the occasional fights and adventures on the part of monkeys who enjoyed swinging through the wires in the curtain antenna systems. Crocodiles also ventured onto the station property on occasions.
Test broadcasts from the 1st shortwave transmitter were noted on December 1, 1984, and also from the 2nd shortwave transmitter a few weeks later, in early January 1985. In April, test broadcasts were noted from the mediumwave transmitter; and in mid year, the 3rd shortwave transmitter became airborne. Electric power was generated at the station itself.
The final configuration of the four broadcast transmitters was a little different from that which was originally envisaged. The 600 kW mediumwave transmitter became two at 300 kW, though the total output on 1548 kHz was dropped to 400 kW. The three shortwave transmitters at 250 kW each became two at 300 kW and one at 250 kW, though all were in use on air at 250 kW each. This electronic equipment was provided by the German electronics giant, Telefunken.
The original program feed was provided via Colombo, with 5 FM transmitters perched on top of Sri Lanka’s 2nd highest mountain, at Radella. In due course, the program feed from Germany was taken off satellite at Perkara.
Deutsche Welle Perkara-Trincomalee was ready for full service in October 1988, but this usage was postponed until the middle of the following year, due to a shortage of local trained staff. The three shortwave transmitters were heard at good level throughout Asia, and well beyond also. The mediumwave transmitter was also heard quite widely.
Multitudinous QSL cards have been issued in confirmation of wide coverage areas of Deutsche Welle Sri Lanka. According to one reference, the official Sri Lankan callsign for this mighty station was 4QQ, though no callsign was ever used on air.
There were times when the station was closed, and at times the staff was evacuated to safe locations when insurgents infiltrated the area. On those occasions, DW programming to the Trincomalee coverage areas was carried by Radio Veritas in the Philippines, and also by shortwave stations located in the southern countries of the former Soviet Union.
As is happening these days to so many important shortwave stations throughout the world, downsizing is now part of the picture. Deutsche Welle decided to close two of its major shortwave relay stations, Sines In Portugal & Trincomalee in Sri Lanka. At the end of October last year Deutsche Welle programming from the Trincomalee relay station came to an end, though some client programming remained on the air until the end of the year.
However at this stage, the noted Victor Goonetilleke in Colombo reported that the SLBC carried one program via the Trincomalee station, and this was a three hour broadcast in the Sinhala language beamed to the Middle East on 11750 kHz from 1530 - 1830 UTC.
Then Jose Jacob VU2JOS at Hyderabad in India noted a brief series of test broadcasts from the mediumwave transmitter on 1548 kHz, when a simple station announcement was given in several languages. That was earlier this year.
On January 1 earlier this year, the large international radio broadcasting station located at Perkara-Trincomalee was taken over by the Sri Lanka Broadcasting Corporation. That was the end of an era; alas DW Sri Lanka is no more!
(Wavescan/AWR/Adrian Peterson/NWS163)
at 11:21 AM