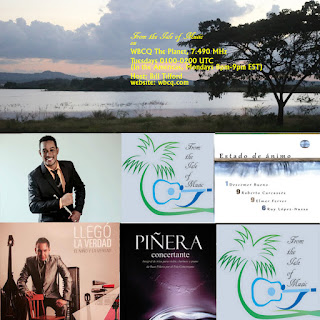 March 7 in the Americas (March 8 in Europe, Asia and Africa), our special guest will be Ethiel Failde, whose Orquesta Miguel Failde defends the Danzon, with an interview we recorded in Havana along with some music from their new album. The Danzon influenced the development of early North American Jazz. We also continue sharing the wonderful Cuban Classical album Piñera Concertante; we'll play 10-15 minutes of this each of the next few weeks. And, of course, more great music from Cuba including a taste of Los Latinos, a popular dance band from the 70s, some of the great Cuban Jazz album Estado de Animo and the great Timba album by El Niño y la Verdad.

*** Every Monday night from 8pm-9pm EST in North, Central and South America (Tuesday morning from 0100-0200 UTC in Europe and Africa) on the short waves on WBCQ The Planet, 7.490 MHz: From the Isle of Music, a new radio program dedicated to the music of Cuba – Jazz, Fusion, Timba, Nueva Trova, Son, Classical, Folklorica, interviews with musicians, even a little history of the music now and then. Partly in English, en parte en español. “Like” our page to keep informed about what we will bring you. (For those without shortwave or outside of viable signal range, there are also a couple of ways to stream the frequency via Internet; see the instructions in our NOTES section).
William "Bill" Tilford, Owner/Producer
at 9:03 AM