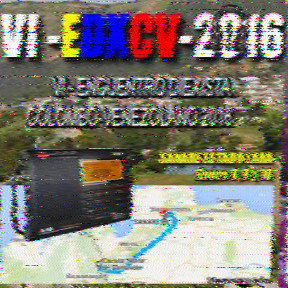 The German communications regulator Bundesnetzagentur jhas changed its mind about allowing digital modes on shortwave broadcast transmitters in Germany. Apparently BNetzA thought that Channel 292 was transmitting the text and images in single sideband (SSB), which is how amateurs, military, etc, transmit the digital modes. Now that they know that the MFSK32 and other modes are sent as program audio on an analogue amplitude-modulation shortwave transmitter, their objections were withdrawn.  (It's similar to A2A modulated CW.)

BNetzA prefers that the term MFSK32 not be used to describe these broadcasts, but we have to specify the mode so that you can set Fldigi or other decoding software to the correct mode. In any case, the weekly MFSK32 transmission will resume on The Mighty KBC, and DigiDX will return to Channel 292.

Meanwhile, VOA Radiogram this weekend will be all MFSK32 except for the transmission schedule in Olivia 64-2000 under the closing music.

The Mighty KBC will (after a one-week break) transmit a minute of MFSK32 Sunday at about 0220 UTC (Saturday 10:20 pm EDT) on 6040 kHz, via Germany.  Sometimes the MFSK32 is as late as 0228 UTC. Reports for this KBC reception to Eric: themightykbc@gmail.com

Thank you for your reports to VOA Radiogram last weekend.  I am now compiling the MFSK image gallery from program 136 (November 2015) and hope to send that out this weekend.

Fldigi saves decoded MFSK images as png files in the folder \fldigi.files\images\.  When you send a reception report, please attach those png files.

Kim Andrew Elliott
Producer and Presenter
VOA Radiogram
voaradiogram.net
Twitter: @voaradiogram (especially active before, during, and after broadcasts)
at 10:50 AM