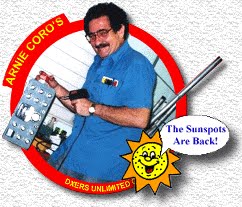 I am your host, Arnie Coro, radio amateur CO2KK and yes we are now on the air expecting a very low solar activity to continue and that will bring some nice DX on the long wave and medium wave broadcast bands. A quick scan done early Tuesday UTC day brought several nice signals on the 25 meters international broadcast band, spanning from eleven dot six to twelve dot one megahertz.

Si amigos this is your favorite radio hobby show reaching you when solar activity continues at very low levels. Be aware that 2019 is the year of the quiet sun.

Radio is a very challenging hobby. Almost every day we find out about one new way of playing with our radios. Take for example, the increase in use of the two low frequency amateur bands.

Yes, I am talking about the two thousand two hundred meters band, and the 630 meters band. A press release coming from Australia provides information about a new automatic beacon that has been granted a license by Australia's telecommunications authority.

Here are the details
A new Beacon on 2200

The Caboolture Radio Club in Australia reports the start of operation of a new beacon on the 2 200 meter band.

The ACMA has granted permission for continuous operation of a beacon on
137.444 kHz using the call sign VK4RBC in grid QG62LW, using WSPR2 plus a CW identifier.

The power is 1 W EIRP into a 500 m long wire at 40 m maximum height.
The new beacon uses a very special digital mode WSPR Two, known as Whisper that is very effective for long distance communication.

The other low frequencies band that is making headlines during the winter season of the northern hemisphere is located just below the AM broadcast band that starts on 530 kilohertz and spans up to 1700 kilohertz,

Cuban radio amateurs have received access to the two new low frequencies bands, following the specifications for its use by the International Telecommunications Union, the specialized United Nations agency that originated in 1865, making it the most ancient telecomms agency.

The 2200 meter or 136 kHz band is the lowest frequency band in which amateur radio operators are allowed to transmit. It was formally allocated to amateurs at the 2007 World Radiocommunication Conference (WRC-07). The band is available on a secondary basis in all ITU regions with the limitation that amateur stations have maximum radiated power of
1 watt effective isotropic radiated power.

The 2200 meterband is in the low frequency (LF) region, just below the 153–279 kHz longwave broadcasting band.

The International Telecommunication Union's 2007 World Radiocommunication Conference (WRC-07) in Geneva agreed a secondary allocation of 135.7–137.8 kHz to the Amateur Service on Friday, 9 November 2007. Prior to the ITU formal allocation some countries did have access or predecessors.
A number of European countries have already allocated the 135.7–137.8 kHz band to amateur radio use based on CEPT/ERC Recommendation 62-01 E ("Use of the band 135.7-137.8 kHz by the Amateur Service", Mainz 1997).

The allocation is on a secondary basis with a maximum ERP power of 1 W.Otherwise the band 130–148.5 is allocated on a primary base to the Maritime Mobile Service and the Fixed Service. The main users are naval one-way transmissions and radiolocation systems.

Such low frequency transmissions require specialized equipment – usually custom made by radio amateur experimenters, but now slowly becoming available from professional radio equipment suppliers. In countries where it is allowed, maximum radiated power is usually limited to 1 Watt
(0 dBW or 30 dBm), but even this can be extremely difficult to achieve from practical equipment and antennas. Reception also poses problems due to considerable natural and man-made noise and interference (QRN and QRM).

Many users and experimenters have settled on extremely slow, computer-generated and displayed Morse code as the most common transmission mode. This mode is known as QRSS, where the doubling of the ‘S’ emphases the extreme slowness. (The international Q code QRS means “Please send more slowly”, or “slow Morse” in radio jargon.) Band plan

The other low frequencies amateur bands presently authorized is known as the 630 meters assignment. Here is now more information about it:

The 630 meter (or 600 meter) amateur radio band is a frequency band allocated by the International Telecommunication Union (ITU) to amateur radio operators, and it ranges from 472 to 479 kHz, or equivalently 625.9 to 635.1 meters wavelength. It was formally allocated to amateurs at the 2012 World Radio Communication Conference (WRC-12).

The band is available on a secondary basis in all ITU regions with the limitation that amateur stations have maximum radiated power of 1 Watt effective isotropic radiated power (EIRP); however, stations more than 800 km from certain countries[1] may be permitted to use 5 Watts EIRP.

The new WRC-12 allocation did not take formal effect until 1 January 2013. However, several countries had previously allocated the WRC-12 band to amateurs domestically.

Previously, several other countries have authorized temporary allocations or experimental operations on nearby frequencies. The band is in the Medium Frequency (MF) region, within the greater 415–526.5 kHz maritime band.

Send your signal reports and comments to inforhc@enet.cu and via air mail to Arnie Coro, Radio Havana Cuba.