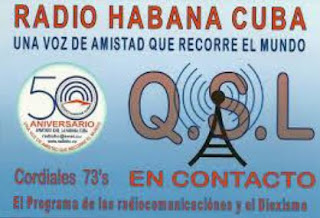 Sunday 20 January 2019
Arnie Coro CO2KK
Hi amigos, welcome to the weekend edition of your favorite listener oriented, technically minded radio hobby program, coming today once again directly from  right next to my ham radio station CO2KK, exactly as it happened many years ago, on the 27th of October of 1998, when I was sending an advance warning to radio amateurs in the Caribbean and Central America as the huge Hurricane Mitch was approaching the area. As many of you that heard that program remember well, a great number of radio amateurs in the Caribbean participated in a large-scale communications effort related to one of the most powerful storms ever seen in the area ever.

Amateurs in Canada, the United States of America, South America and even from Europe helped by providing relays on the 40 meters band when long skip made it impossible to work on that band, and as expected practically all the 2 meters band repeaters in the affected areas were damaged or totally destroyed by the hurricane force winds, landslides and the lack or commercial power. The availability of the 80 and 40 meter band amateur equipment that can operate using small generators or even car batteries has proven to be a great asset when weather or earthquake emergencies destroy local telecommunication facilities, or make using them almost impossible due to excessive traffic generated during the emergency. The 40 meter bands long distance relays of weather data for stations located in the affected areas and the forecast centers is vitally important too.

Item Two: A detailed explanation of why emergency communications provided by amateur radio operators are essential during hurricanes and earthquakes, as well as large scale accidents. Hams using portable equipment that can be powered from standby power sources are able to keep vital links to the affected areas among the important information provided on those two way links are weather data taken at places that were there, are no official weather stations, advance warning from possible flooding and help during search and rescue operations, and later after the storm is over, the amateur radio links are used to help medical aid workers, to select landing sites for helicopters and planes and in general to keep things moving during the very complex post hurricane period.
Among the most interesting aspects of the way that hams provide emergency communications is how simple antenna systems, low power radios and good and very well-trained operators combine to keep communications flowing

Most of present-day amateur disaster area communications is done using single sideband voice, but the increasing availability of portable lower cost lap top and notebook and tablets computers are encouraging the use of digital radio links, which are much more reliable, use less power and are also less prone to interference. Computer to computer communication via a radio link is an ideal way of handling emergency traffic, but as a friend of mine likes to say it is a developed country approach, but lower priced computers that are now available are making possible implementing keyboard to keyboard emergency communication links by amateurs in less developed parts of the world.

More about emergency communications during natural disasters a little later in today's edition of Dxers Unlimited, coming to you directly from my home location, right next to CO2KK my amateur radio station that is now part of not one or two, but actually three emergency communications networks on the 20, 40 and 2 meter bands Now let's take a break  I'll be back in a few seconds Short musical intercut

You may nowadays download from many public free access Internet sites a large number of very interesting files dealing with antennas, shortwave propagation, solar activity etc, that will help you to optimize your amateur radio station and make it much more useful for handling emergency communications whenever required.

You can also request our QSL card, by just sending an e-mail directly to me send mail to inforhc@enet.cu

Item Three: Each edition of the big worldwide ham radio contests like the CQ World Wide SSB or the WPX prefix contest help quite a few newcomers to the amateur radio hobby to increase their total number of countries, or DX entities as they are now called... worked. Many Cuban radio amateurs both old and new participate in those challenging and interesting events and some of them have achieved very good results too.

Item Four:Transatlantic medium wave AM band DX season is now in full swing, something that happens has another peak time spanning from December to the end of March, because of the expected decrease in ionospheric absorption caused by the lower solar activity. Those AM band Dxes with good receivers, and the special antennas required are able to pull several of the most powerful stations from Europe and the Middle East quite easily during solar minimum years , by using narrow filters that let those stations come in between the 10 kilohertz channel spacing used by AM broadcasters in the America's.
Among the easy ones from the other side of the Atlantic, are several super power stations operating at the high end of the band, from about 1400 to 1620 kilohertz. Don't be surprised if at around your local midnight, when the sun is just rising in Europe, at least two or three of those megawatt stations make themselves heard via powerful heterodynes or whistles between the AM stations on this side of the Atlantic.

The super simple 2 element 2 meter band Yagi beam antenna which is ideal for emergency work it is built using either standard TV antenna elements, or heavy gauge copper wire The support for the antenna is made from one of my favorite antenna building materials-you guessed right amigos broomsticks.

This is a very compact antenna that will provide about four or maybe a little more dB gain over a standard half wave dipole, but of course, many more db's above the typical rubber duck antenna used by hand held radios or handie- talkies The dimensions for this antenna are very easy to remember, if you choose to do your homework in metric. The reflector element is 101 centimeters long and the dipole driven element is 98 centimeters long  The two are separated by 50 centimeters of broomstick boom, and the antenna's driven element is fed using standard 50 ohm coaxial cable I leave about 30 of 40 more centimeters of broomstick behind the reflector element, so that I can tie the antenna to any available supporting structure This is a portable emergency antenna system, so it is made with low cost materials. The elements can be taken from an old TV antenna, or you may buy aluminum tubing of about 10 millimeters or 1-centimeter diameter.

The dipole element is fed at the center, so the two sides should be mounted on a piece of insulating material like acrylic plastic, polyethylene or PVC, you should use good insulation if you want the antenna to work well even when it is raining or snowing This is about the lowest cost "amplifier" that you can think off. See by the numbers... a rubber duck antenna used on a typical two-meter handie-talkie has a loss of no less than 6 db relative to a half wave dipole.

The Ultra-Low Cost 2 meter Broomstick Yagi antenna, has a 4 dB gain over a dipole in other words, if you replace the rubber duckie with my two element makeshift antenna, your signal will be a whopping 10 db more powerful, or 10 times louder than when you used the little rubber duck antenna

See you all at the middle of the week edition of Dxers Unlimited next Tuesday and Wednesday UTC days... Send your signal reports to inforhc@enet.cu or via Air Mail to Arnie Coro, Radio Havana Cuba, Havana, Cuba.