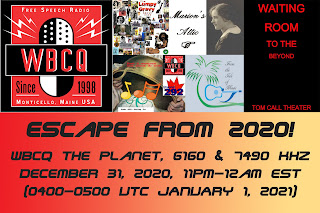 Both Radio Channel 292 and WBCQ The Planet will have New Year’s Eve specials organized by Bill Tilford  (aka Uncle Bill) featuring multiple programs:
On December 31, Radio Channel 292 will present a 2-hour special,  Neujahrsgrüsse von Radio Channel 292 featuring segments from nine different music programs with classical, jazz, rock, Cuban, and volksmusik from 2300-0100 UTC on 3955 (10kw), 6070 (100kW from Moosbrunn) and 9670 (10kw) kHz.  It will repeat on all three frequencies at 10kw from 0900-1100 UTC on January 1.   The time for the 10kw transmissions was donated by the station.
The broadcast at 2300 will use a directional beam towards Central and South America on 9670 kHz and might also be listenable on parts of the east coast of North America depending upon propagation.
On December 31 from 10pm-11PM EST (0300-0400 UTC January 1), WBCQ presents Escape From 2020!, with a short play from Tom Call Theater and music from Marion’s Attic, The Lumpy Gravy Radio Show, From The Isle of Music, and Uncle Bill’s Melting Pot.  Airtime is donated by Allan and Angela Weiner.
The frequency 6160 kHz has penetrated deep into Europe in some previous nighttime transmissions from WBCQ
William "Bill" Tilford, Owner/Producer
Tilford Productions, LLC
5713 N. St. Louis Av
Chicago IL 60659-4486
email: bill@tilfordproductions.com
at 10:30 AM