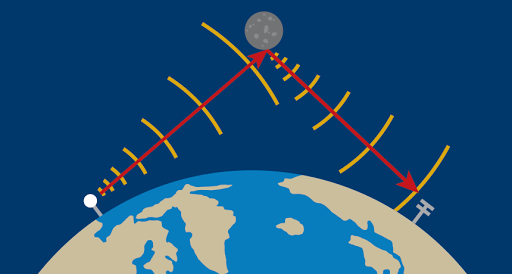 On two recent occasions here in Wavescan, we have presented the story of Moonbounce Radio with the events as they occurred in Europe and in the United States.  In our program today, we present the story of other significant Moonbounce events, as they occurred in chronological order in the United States, in Australia, and in Alaska.
It was in January 1946, that the American Army Signals Corps near Belmar in NJ successfully demonstrated the reception of echo signals from the Moon under the Diana Moonbounce Project.  Two months later in March 1946, the American International Telephone & Telegraph Corporation (IT&T) revealed the fact that their specialized engineers had also been engaged in a similar project, the reception of radar signals between two distant points on Earth via the Moon.  We should remember that this was before the introduction of the more satellite era.
In order to be effective, the transmitted signal from Earth needed to be at a very high frequency in order to successfully penetrate through the Ionospheric Layers surrounding planet Earth.  In addition, they declared, it would be a very expensive project.
Later in the same year, Westinghouse announced that they were planning a similar project and that they would be ready within the next 18 months to launch a rocket, aimed at the Moon.  Aboard the small rocket, which would be launched by the American Army, would be a 100-pound ultra shortwave transmitter.
This transmitter would be hermetically sealed into the rocket, and it would be programmed to broadcast pulse signals for one minute each hour.  These signals would then be received at special receiving stations upon Earth, and they would thus indicate the progress of the rocket in its travel to the Moon.
In November (1946), the first successful transmission of radio signals from outer space was achieved when a modified German-designed V2 rocket was fired by the American Air Force from White Sands in New Mexico.  This rocket contained a pulse transmitter, and it reached an altitude of 63½ miles.  The radio transmitter in this 1946 missile was activated from the ground by radio signals on both 6 MHz and 470 MHz.  The rocket transmitter broadcast a return pulse signal on 493 MHz.
On the next occasion of the firing of a high altitude rocket from White Sands in New Mexico, it was stated that sweep signals would be broadcast from outer space all the way from 3.5 MHz up to 6 MHz.  And then, on an even later occasion, they planned, another rocket will be fired, with a receiver and transmitter that was engineered to receive signals from chronohertz station WWV in Washington DC.  As this rocket travels through space, it would indicate the thickness of the various ionized layers in the ionosphere.
Around the same time, that is soon after the end of World War 2 in the middle of last century, Professor Frank Kerr at the Australian Council for Scientific and Industrial Research in northern suburban Sydney began to conduct research into Moonbounce Radio.  He installed a set of specially designed radio reception equipment at the Radio Physics Laboratory in an isolated area out from Hornsby, just off the Pacific Highway.
At predetermined times and dates, a radio signal was beamed to the Moon from a 100 kW transmitter located at the (now closed) Radio Australia shortwave station at Shepparton in Victoria, and reception from a Moon echo was recorded on many occasions at Hornsby.  The Shepparton frequencies were 17840 kHz and 21540 kHz, and these coded transmissions were carried by either of the two new 100 kW STC-AWA transmitters at Shepparton, VLA and VLB.
Beginning on July 30, 1948, the University of Illinois at Urbana in the United States attempted to receive a Moonbounce echo from the Australian transmissions.  During the three-month period of these experimental transmissions, Urbana was able to receive an echo from the Moon, but only twice.
In the 1960s, a shortwave transmitter manufactured by the Pye company at Cambridge in England was installed at Jodrell Bank, 25 miles south of Manchester, for the transmission of music and speech.  These transmissions were successfully received as Moonbounce echoes at the American Air Force observatory at Sagamore Hill in Massachusetts in the United States.
However at this stage, international radio communication was taking another direction.  On July 10, 1962, the American space agency NASA successfully launched a medium-level communication satellite, Telstar 1, from Cape Canaveral in Florida.  Shortly afterward, Telstar 1 began the relay of TV programming across the Atlantic for downlink relay in both Europe and North America.
It was demonstrated that Moonbounce radio was too expensive and too unreliable for regular international usage, and in any case it was now beginning to be superseded by a new and improved system; that is, geostationary communication satellites.  Moonbounce was no longer necessary.
However in spite of all of these superior developments, Moonbounce radio is still alive, at least a little.  It is nowadays generally the purview of amateur radio operators around the world who hold an experimental interest in pursuing the novelty of communicating with other radio amateurs via an echo signal from Earth up to the Moon and back again.
However, in a subsequent Moonbounce occasion, the American experimental HAARP radio station near Gakona in Alaska was used for a two-day Moonboince event in January 2008.  These Moonbounce transmissions utilized a massive total of 360 shortwave transmitters at 10 kW each, on two shortwave frequencies, 6792.5 kHz and 7407.5 kHz.  This two day experiment, on January 19 & 20, was conducted in an attempt to analyze the composition of the soil on the surface of the Moon.
(AWR/Wavescan)
at 5:50 PM