MAY 2021
Radio Free Asia (RFA) announces its 76th QSL card. This latest design commemorates the 2020 Summer Olympic Games in Tokyo, Japan rescheduled to July 23 – August 8, 2021, due to last year’s global pandemic.
The Games always bring people together from around the world in peace and harmony to respect universal moral principles. This design is an adaptation of RFA’s first panda design originally used for the 2008 Beijing Olympics. This updated version of the original design adds the national flag of Japan as it waves in the breeze. This QSL card all valid reception reports from May-August 2021.
RFA’s Tokyo 2020 Summer Olympics QSL 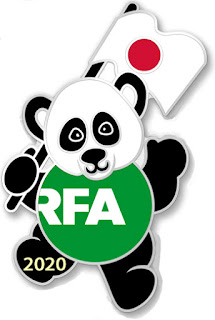 Created by Congress in 1994 and incorporated in 1996, RFA broadcasts in Burmese, Cantonese, Khmer, Korean to North Korea, Lao, Mandarin Chinese, Vietnamese, Tibetan (including Uke, Amdo, and Kham dialects), and Uyghur. RFA strives for accuracy, balance, and fairness in our editorial content. As a ‘surrogate’ broadcaster, RFA provides news and commentary specific to each of our target countries, acting as the free press these countries lack. RFA broadcasts only in local languages and dialects, and most of our broadcasts comprise news of specific local interest.  More information about RFA, including our current broadcast frequency schedule, is always available at www.rfa.org.
RFA encourages listeners to submit reception reports.  Reception reports are valuable to RFA as they help us evaluate the signal strength and quality of our transmissions.  RFA confirms all accurate reception reports by mailing a QSL card to the listener.  RFA welcomes all reception report submissions at http://techweb.rfa.org (follow the QSL REPORTS link) not only from DX’ers but also from our general listening audience.
Reception reports are also accepted by email at qsl@rfa.org and by mail to:
Reception Reports
Radio Free Asia
2025 M. Street NW, Suite 300
Washington DC 20036
United States of America
at 2:35 PM