Radio Free Asia (RFA) announces the release of our 58th QSL.  It is the fourth design in the series "Celebrating Musical Instruments of Asia". This card shows a khene , which is a traditional Lao mouth organ played primarily in Laos and Thailand. The khene’s pipes are made of bamboo, while its reed, which vibrates to produce the sound, is made of brass or silver. The khene is usually played using a pentatonic scale, using five notes per octave as opposed to the seven notes per octave used in most Western music. This QSL is used to confirm all valid reception reports from May 1 to July 31, 2015. 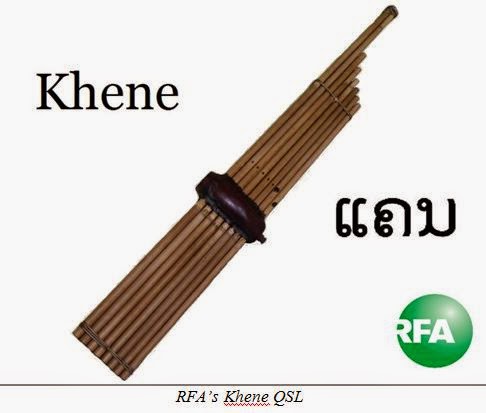 Created by Congress in 1994 and incorporated in 1996, RFA broadcasts in Burmese, Cantonese, Khmer, Korean to North Korea, Lao, Mandarin (including the Wu dialect), Vietnamese, Tibetan (Uke, Amdo, and Kham), and Uyghur. RFA strives for accuracy, balance, and fairness in its editorial content. As a ‘surrogate’ broadcaster, RFA provides news and commentary specific to each of its target countries, acting as the free press these countries lack. RFA broadcasts only in local languages and dialects, and most of its broadcasts comprise news of specific local interest.  More information about Radio Free Asia, including our current broadcast frequency schedule, is available at www.rfa.org.

RFA encourages listeners to submit reception reports.  Reception reports are valuable to RFA as they help us evaluate the signal strength and quality of our transmissions. RFA confirms all accurate reception reports by mailing a QSL card to the listener.  RFA welcomes all reception report submissions at http://techweb.rfa.org (follow the QSL REPORTS link) not only from DX’ers, but also from its general listening audience.