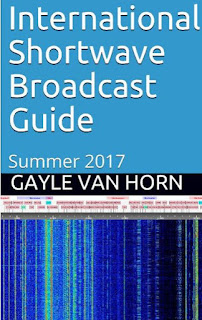 
W4GVH. This all important semi-annual information resource is your electronic guide to the world of shortwave radio listening.
The release of this book is very timely for international radio monitors given the recent outbreak of tensions in the world hotspots of Eastern Europe, Middle East, East Asia and the Korean Peninsula.
Shortwave radio listeners are routinely entertained with unique perspectives to events, music, culture, history, and news from other countries that you won’t see or hear on your local or national broadcast channels.
Shortwave radio broadcasts are not restricted by country borders or oceans, and they can propagate thousands of miles, reaching millions of listeners worldwide, in over 300 different languages and dialects.  These worldwide transmissions are monitored on internationally assigned radio frequencies between 1700 kHz and 30 MHz.
There are even broadcasts from the dark side, transmitted from broadcasters known as clandestine or clanny stations.  Clandestine broadcasters are wrapped in mystery and intrigue, and they usually exist to bring about some sort of political change to the country they are targeting.                         Listeners who live in the United States can easily hear shortwave broadcast stations from the Americas, Europe, Africa and Asia with an inexpensive shortwave radio receiver, if you know when and where to listen!
The ISWBG is your exclusive 24-hour station/frequency guide to “all” of the known longwave, selected mediumwave and shortwave radio stations currently broadcasting at the time of publication.
New in this eighth edition of the ISWBG is Surfing the Shortwave Radio Bands without a Radio by senior radio monitor Larry Van Horn.  When News Breaks: Getting Your News from the Front Lines through streaming media by Loyd Van Horn.
Also included in this edition is increased frequency and station coverage of longwave broadcasters, selected medium wave broadcast frequencies used by international broadcasters, all known international standard time and frequency stations transmitting worldwide, and some selected spy numbers broadcasts.