China's Propaganda Department Takes Over Regulation of All Media 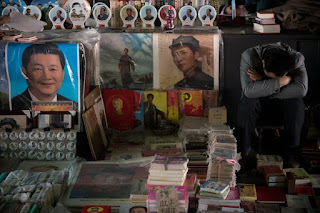 The ruling Chinese Communist Party is strengthening its hold on all forms of public expression, enlarging its powerful propaganda department to absorb agencies responsible for regulating the mass media, and exporting its ideology to the rest of the world via a new mega-broadcaster.

As President Xi Jinping embarks on a second, unlimited term in office following the annual National People's Congress (NPC) last week, he is presiding over a massive restructuring in which the ruling party will take over key government agencies and ministries.

"In order to strengthen the party’s centralized and unified leadership in public opinion work by the media, strengthen the management of publishing activities and develop a prosperous, socialist publishing industry with Chinese characteristics, the responsibilities of the State Administration of Press, Publication, Radio, Film and Television (SAPPRFT) will be reassigned to the Central Propaganda Department," the party's central committee said in a directive published in state media this week.

"After this adjustment, the main responsibility of the Central Propaganda Department will be to implement the party’s propaganda guidelines," it said, adding that the department will also formulate and implement media and publication policy and manage the sectors.