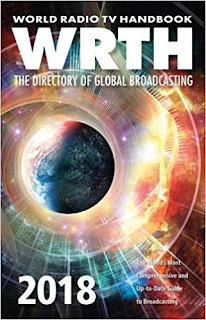 As December nears each year, in addition to holiday activities, radio enthusiasts are reminded that the release of World Radio TV Handbook’s (WRTH) annual edition is also in our future. This year is not the exception. WRTH 2018 released their latest edition, to worldwide listeners during the latter part of December.


Nicholas Hardyman, Publisher, begins this edition with a brief synopsis of what is included in the book and some general comments. Equipment reviews follow, with a look at the ICOM IC-R8600, a wideband communications receiver, receiving rave reviews for it’s combination of a modern SDR (software defined radio), below 30 MHz coverage, and a conventional superheterodyne radio, referred to as “two separate receivers” in one.


Building on last year’s review of the SDRplay RSP, WRTH reviewed their new model known as SDRPlay RSP2. The newer receiver offers a considerably larger feature set and provides extended coverage down to one kHz. The reviewer notes, “the RSP2 is hugely impressive.”


Are you looking for a high-end portable radio? The Tecsun PL-880 is rated as Tecsun’s best product yet, owing to the excellent DSP filtering and good audio. In contrast, is the Tecsun S-8800, a larger, though considerably different transportable radio. An additional review of the AOR AR-DV10, a hand-held battery-powered scanning receiver, popular among scanner hobbyist is also included.


Antennas play a large role in your radio reception, and the Cross Country Wireless Active Loop, appears to be an answer to many antenna issues. The testers conducted test-runs both indoor and outdoor. The Cross Country Wireless loop is noted for its ease of assembly and disassembly, as well as being an asset for those faced with limited space for antennas.


Another SDR review in this edition was the Expert Electronics ColibriNano It gathered favorable attention from the WRTH reviewers. The Nano offers a bandwidth of 10 kHz-55 MHz, and can be extended to 500MHz with an external filter. Overall, the Nano received good reviews, comparable with the lower-cost RSP2.


In the features section, well-known New Zealand DXer, Bryan Clark, takes readers on an Antipodean Journey to Spain and Morocco. An antipodean consists of two places situated diametrically opposite to one another on the earth’s surface. Using this as a radio perspective, Bryan focused on his long-held fascination for this part of the world and the radio-scenes for medium wave and shortwave.


In March 2017, Voice of Hope, the first and only Christian radio station in Israel, began broadcasting on mediumwave 1287 kHz. Because of its mission and powerful coverage, the station is well-placed to reach their Arabic programming into Cyprus, Jordan, Lebanon and Syria, with nighttime coverage into areas of Egypt and Turkey. Founder and President of the Strategic Communications Group, John Tayloe describes setting up a new medium wave station on the southern shore of the Sea of Galilee.


Radio nostalgic fans will enjoy Dr. Martin Hadlow’s feature on exploring the history of broadcasting in Radio Voices from the South Seas. From the new ‘technology’ of 1923, perils of WWII, and present day international regulations, Solomon Islands Broadcasting Corporation remains a critically important role to listeners in the South Seas and beyond.


DRM (Digital Radio Mondiale) began as an experiment, with predictions as a major advancement in broadcasting, but has not by many observers, ‘caught-on’ with world listeners. Is there any future for this mode in this year’s feature Digital Update?


Ulf-Peter, adjunct professor of physics, updates his annual HF Broadcasting Reception Conditions Expected During 2018. During the year, he predicts a good year for reception on the HF broadcasting bands, recommending an excellent time for newcomers to join the radio hobby.


The National Radio section includes domestic radio stations broadcasting to a national audience on medium wave, shortwave, FM and DAB. Listings are grouped by country and include frequencies, transmitter information, power, contact and website information. The International Radio contains the same information for international broadcasters airing to a world audience.


Clandestine and Other Target Broadcast, contain stations broadcasting politically motivated programming, or those targeted at zones of local or regional conflicts. A one-page listing of Religious Broadcasters Cross Reference Table closes this section.


The World Radio TV Handbook, 72nd edition, remains a gold-standard reference book for the global broadcasting audience. It still is the most comprehensive guide to broadcasting and a must reference in every radio listening-post. I highly recommend this excellent publication.


World Radio TV Handbook 2018, is available from the WRTH website at http://www.wrth.com/shop/ It is also available from Universal Radio at https://www.universal-radio.com/catalog/books/2018.html.