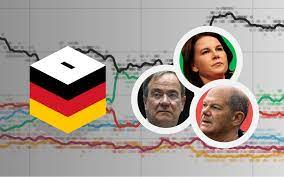 Germany votes on the 26th of September!

Every four years a new federal government is elected in Germany and now the time has come again. In order to be well prepared for the upcoming elections, we would like to introduce you to our programs that will keep you informed about it.
If you always have been interested in Germany and its politics – DW offers something for you in our special website! With a little luck, you also could win a great prize!
Even though it is not clear which political party will emerge as the winner of the election, one thing is for sure: There will be a new chancellor. After 16 years Angela Merkel will resign and not run for office again. On this occasion you will be able to follow the live premiere of our documentation "Angela Merkel – Navigating a World in Crisis" on the 17th of September on our YouTube Channel DW Documentary. From September 19th, the film can also be seen on DW English.
You also can check out the documentation "Impatient, Dissatisfied, Divided? - Germans at the End of Merkel's Grand Coalition." on DW Docfilm.
Or listen to our podcast "Merkels last dance", where each episode is dealing with one of the problems Angela Merkel faced during her periods of governance.
There will be rolling news coverage about the German election from 3:00pm UTC to 9:00pm UTC on DW English. Including a live broadcasting event called "Elefanten-Runde" in the evening of the election on DW Deutsch+ and DW English from 6:15pm to 7:15pm UTC where politicians from different parties will answer questions from journalists. Additionally, on the 27th of September DW will broadcast news in the morning containing a debate “To the point” at 8:30am UTC about the election.
And if you have had enough of debating politicians, check out our series "Flipping The Script". Here it is not the politicians but the voters who are showing up on stage to debate the most important questions.
Here you can find more information about the DW program on TV and live stream.
Win a special prize!
And we have also come up with something special for you: Answer the following question and with little luck win a Germany-DW-Package! Follow here to enter our quiz! Best of luck!
Kind regards
Your DW Service Team
newsletter@dw.com
dw.com/english
dw.com/germanelection
at 7:00 AM