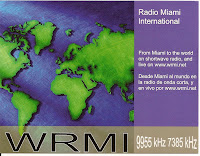 All times UTC on 9955 kHz
Viva Miami – A series of short 7-minute Viva Miami segments with Christmas music from throughout the Caribbean and Latin America will air during the entire month of December, UTC Tuesday-Saturday, in English at 0107 and Spanish at 0152.

Radio Prague – Our relays of Radio Prague will include many features about Christmas in the Czech Republic in the days around December 25. The English relay is daily (7 days a week) at 1000-1030 and 1500-1530 UTC, plus UTC Tuesday-Saturday at 0300-0330 and 0700-0730.
Cuban Programs – WRMI airs many programs from Cuban exile organizations in Miami, which will include many special Christmas features around the holiday period. All of these are in Spanish, except for the Voice of the Center for Human Rights and Democracy Brigade 2506, which is in English, aired Sundays at 1600-1615 UTC. Check December 28 for Christmas specials.
Trova Libre – This is a musical program in Spanish (mostly Cuban music), which will have a special Christmas edition on UTC December 22 and 29 at 0000-0030.
Religious Programs – WRMI airs many religious programs in English and Spanish, which will air Christmas specials during the holiday period. Maravillosas Palabras de Vida, a Spanish program from the Salvation Army, will have Christmas music from the Salvation Army brass band, UTC Mondays at 0100-0115
(Jeff White, WRMI/Programming Matters, Dec. MT 2008)
at 9:30 AM