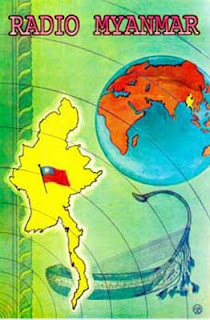 
5985.0, Myanma Radio, Naypyidaw, 1530, Fr Dec 25, Fair reception (very readable) in English, Station ID, news and weather, 1537 NHK's "Friends Around the World," a Thursday and Friday show, interesting program about haioko short poems, with three lines of five syllables, seven syllables and five syllables. Clear audio at  https://app.box.com/s/lgi98a89f41b0zq3nixafut8sah4ud8u . Also heard at 1529, Dec 31, "Happy" New Year's song; 1530 New Year's program preempted their normal segment in English; in vernacular. Song "Auld Lang Syne" in English, program of light songs in English. (Howard). In DX-Window 545 I saw that Myanma Radio relaying VOA. I heard NHK World program in Myanmar language on December 11, so I asked whether they relay NHK not only in English, but also in Myanmar. The QSL Manager verified my report and confirmed also the suspect: "We are broadcasting some programs from "NHK World Radio" that we had contracted with NHK to relay programs in Myanmar and in English. NHK is broadcasting in Myanmar and English language". (Nurmela)

7200.09, Myanma Radio, Yegu, Yangon, 1300-1312*, Dec 28. Vernacular, pop songs, slowly improving till suddenly off. Reception contingent upon both RTI and CNR1 (jamming) going off together at 1300*, but recently one or the other has often run late. On Jan 02 jamming from China's CNR1 continued till 1400*, when also Myanma Radio closed after playing indigenous and pop music. But on Jan 04 stayed on all alone till suddenly off at 1437*; after 1400, when Radio Taiwan Int'l and the Chinese jammer signed off, was completely in the clear with some HAM QRM, but mostly fair/good reception. (Howard)
(DX Window 546)
at 12:27 PM