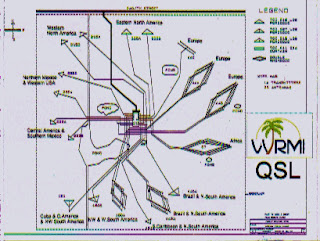 From the WRMI-AWR DX program "Wavescan".

At this location, there was one 50-kilowatt transmitter and a corner reflector antenna beamed to the Caribbean and Latin America. For part of its lifespan, WRMI-Miami also used a North American antenna beamed toward Vancouver. But the evening of 30 November 2013, WRMI's site in Miami went  off the air for the last time, and immediately the station's new transmitter site in Okeechobee went the air for the first time.

Okeechobee is a small city located the north side of the massive Lake Okeechobee in the center of Florida. The WRMI transmitter site is about 15 miles north and 7 miles west of the city of Okeechobee, located far out in the rural countryside a one-square-mile cattle ranch. The site was built by Family Radio, a Christian organization based in Oakland, California, and was owned and operated by Family Radio under the call letters WYFR until it closed down in June of 2013.

WRMI purchased the transmitter facility and put it back the air 1 December 2013, which was actually the evening of 30 November local time in Okeechobee. The Okeechobee site is the largest privately-owned shortwave transmitter site in the Western Hemisphere. It is comprised of 14 transmitters and 23 antennas - a selection of rhombics and log periodics and one curtain array antenna beamed to 11 different azimuths covering primarily North, Central and South America, the Caribbean, Europe, the Middle East and Africa.

AS the site was off the air from the end of June until the beginning of December 2013, it was unknown exactly how quickly the equipment would return to normal operating condition. When we first went the air the evening of November 30th, a number of technical problems with the
transmitters quickly surfaced.

Fortunately, we were not using all of the transmitters initially, so when there was a problem with one unit we were able to replace it with another transmitter until the repairs were made to the first one. And gradually over the course of a few weeks all of the units were brought back into regular operating condition, with the exception of two.

Transmitters 5 and 6 were very old Gates 50-kW units that had been used by WYFR when it was originally located in Scituate, Massachusetts, and later relocated to the new site in Okeechobee in the late 1970's. Both of these transmitters were out of service at the time Family Radio went off the
air, and transmitter 6 was actually scrapped and removed before Radio Miami International took over the site. Transmitter 5 was not operational, and in fact many parts in it had been cannibalised for use in the other WYFR transmitters.

Several months after WRMI began its broadcasts from Okeechobee, the hole left by transmitter 6 was replaced by a transmitter moved from WRMI's old site in Miami to the new one in central Florida. So now the station had 13 operating transmitters. Only number 5 was inoperable.

All 13 working transmitters have been used most of the time over the past almost two years. At this moment, 12 transmitters are the air every day - some for just a short period of time such as an hour or two a day, and some for as much as 24 hours a day. The other transmitter - no 1 - was in daily use until just a couple of weeks ago, but is now in standby in case something happens to one of the other transmitters and number 1 is needed to fill in for a short time. WRMI has 14 Optimod audio processing units - one for each transmitter. These provide an extra punch to the signal.

There is a large Uninterruptible Power Supply which keeps computers, lights and air conditioning operating for several seconds in the event of a power outage. The UPS is replaced by a 25-kW diesel generator which kicks in approximately 20 seconds after a power outage. The generator is
not powerful enough to operate the transmitters themselves, but it keeps the computers and the rest of the transmitter building operating until the power comes back on. Fortunately, most of the power outages in Okeechobee are very short - from a fraction of a second to a few minutes in length.

Currently, WRMI is transmitting about 150 hours per day of programming from a number of clients including religious organizations and relays of overseas stations such as Radio Japan, Radio Taiwan International, Radio Slovakia International and Radio Prague. Dozens of smaller clients air a variety of programs WRMI including news and music shows, cultural programs and many others. WRMI also broadcasts a variety of DX programs in English, Spanish, Portuguese and Italian, including of course Wavescan.

AS for future plans, WRMI hopes to eventually replace the old transmitter 5 with a new, or at least newer, unit, bringing the contingent back up to 14 transmitters. The station has a 23-yearlease with the owner of the cattle ranch, so we hope to be the air shortwave for a long time to come yet.
(Top Nx 1236/16Jan 2016)
yet.
at 11:17 AM