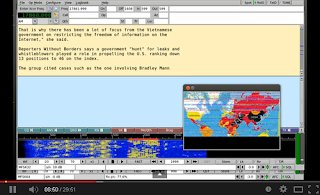 Last weekend's long transmission of Olivia 64-2000 was very interesting. It did result in some successful decodes under difficult conditions. You can see some examples here ...

One thing I discovered is that, when receiving and decoding Olivia 64-2000, it is important that the receiver bandwidth be wide enough to include all of the data, which extends to 2500 Hz above and below the carrier frequency. Otherwise, you cannot take advantage of all the redundancy built in to the Olivia 64-2000 mode.
Those of you who can record the audio using an SDR receiver can experiment with various bandwidths, shape factors, AM versus SSB, etc.

Anyway, last weekend's Olivia 64-2000 was so much fun that we'll include one news item in that mode this weekend, in addition to our usual MFSK32.

The Mighty KBC will transmit a minute of MFSK32 Sunday at 0220 UTC (Saturday 9:20 pm EST) on 6040 kHz, via Germany. Please send reports for KBC reception to Eric: themightykbc@gmail.com .
I will use this weekend of snow in Washington to catch up on your reception reports. I'm now alternating between the oldest and newest reports, gradually working my way to the middle. If you haven't seen the gallery of MFSK32 images I send in response to reports, a recent example is posted here ...

If you have an Android device, try TIVAR to decode the modes on VOA Radiogram. For computers, Fldigi.