Special thanks to Tom Taylor for sharing the history of European Music Radio with our blog readers. If you would like your station featured on Shortwave Central, send your information to: w4gvh   at  frontier. com

Dear Listener of EMR,
Thank you for your recent interest in EMR and thereby supporting the station. Your response as
a listener is a very important factor for our survival. With the ever-decreasing number of short-wave stations due to station closures, we at EMR depend on your correspondence and input, so
we can improve our service to you the listener, and know that our service is of value to you!

EMR’s history is a rather colourful one, and many people will remember the station as a free radio
station. Free, not in the sense of costing you nothing, as that is true of almost all radio, but free in
the sense that the station was free from state control. Some would call EMR a pirate station, but the
word pirate implies theft of a possession. One thing is certain, EMR was once an unlicensed, or illegal broadcaster, whose sole purpose was to demonstrate the airwaves, could be used more effectively
to provide the people of Europe with more choice.  By means of an example, back in the 1970’s when EMR started broadcasting, there were only 19 commercial radio stations in the UK. These days there are over 200, some of which started out like us, operating illegally. Hopefully, we played a small part
in proving the case for more choice on the airwaves.

The first EMR broadcast was heard in February 1976 with test transmissions on 6250khz.
In May 1977 regular scheduled broadcasts commenced on the 3rd Sunday of every month, and these continued until the station was raided in October 1980.

After the raid, we transferred all transmissions to Holland via the Free Radio Service Holland and continued using their services. These Dutch relays ended on the 12th of June 1983 when the station was closed down.

EMR remained silent until 2 years later when UK-based transmissions were heard for a short period of time up until 1986, but once again the station fell silent. It took a further 10 years when in February 1996 it all started over again – EMR was back on the air, but still broadcasting illegally
with it’s own 180watt transmitter.

In November 2002 the station started legal transmissions via the Italian Radio Relay Service in Milan. With the conversion to legal status, came a significant increase in transmitter power to 10,000 watts (10Kw).  From February 2003, the transmitter power increased yet again to 100Kw via the facilities of the LVRTC transmitter in Ulbroka, Latvia.

In January 2005 the official European Music Radio website was set up with all the Information you
will need to Know about EMR, along with pictures and recordings of past programming along with
up to date information of our broadcast schedule. On the 18th September 2005, EMR commenced
live programmes from our UK studios, live on 9290.  The first-ever live phone-in featured a listener from Japan!

On February 12th 2006 the EMR Internet radio streaming service started. This service is available
24 hours a day, and all of our short-wave broadcasts can now be heard simultaneously on the internet in high-quality stereo, which means that even if conditions on short-wave are not favourable, listeners can still hear EMR!

Thanks go out to Jack Raats and Jarasoft in Holland for all their time and effort, and providing
the streaming servers for the internet service which are located in the Netherlands which enables listeners from all over the world to listen to EMR.

From 2008 until 2011, EMR broadcast exclusively via the 100Kw Wertachtal transmitter in Germany in our first association with MV Baltic Radio.

EMR continued to broadcast in 2014 via the transmitter of MV Baltic Radio which is fully-licensed and located in Goehren in Germany.

Over the years EMR has received reception reports from all corners of the world and as far away
as Japan  - New Zealand, South Africa, Brazil, the USA, and of course Europe.

All Broadcasts are in English with music and radio related programming to Europe. Please continue listening to EMR and corresponding with the station, and thanks for contacting us! 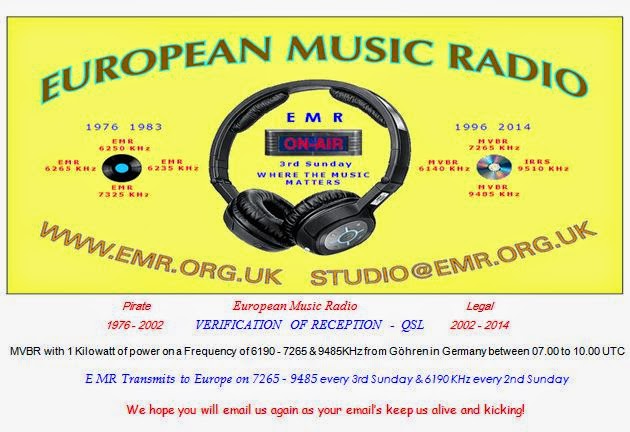 Please visit www.emr.org.uk and click on the “EMR internet radio” button which you will find throughout the website (see the menu on the left).

If you live outside the listening area please try the Twente/Netherlands web receiver at http://websdr.ewi.utwente.nl:8901/