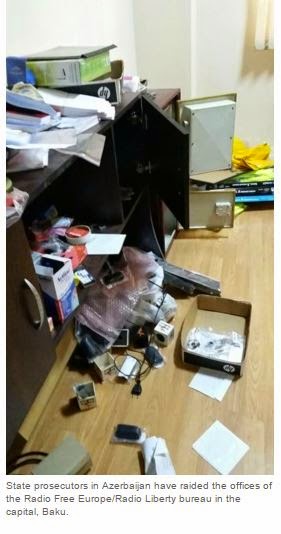 WASHINGTON - The Broadcasting Board of Governors today condemned the raid and closure of Radio Free Europe/Radio Liberty's Baku office by Azerbaijani authorities.

Investigators from Azerbaijan's state prosecutor's office entered the RFE/RL bureau on the morning of December 26 accompanied by armed police officers. They searched the company safe, ransacked files and equipment, and ordered staff members to leave the building after holding them in a room for several hours without telephone or computer access. Several staff members later were summoned for questioning.

"This unwarranted action is an escalation of the Azeri government's abusive attempt to intimidate independent journalists and repress free media," said BBG Chairman Jeff Shell. "We call on the authorities to immediately allow RFE/RL to resume its important journalistic work from Baku, and to release investigative journalist Khadija Ismayilova."


The government raid comes three weeks after the arrest and detention in Baku of prominent Azerbaijani investigative reporter Khadija Ismayilova, a contributor to RFE/RL's Azerbaijani Service programming. Ismayilova was sentenced to two months of pre-trial detention, and if convicted could serve three to seven years in prison. Khadija's arrest has been widely condemned, including by the BBG. Amnesty International has declared Ismayilova a prisoner of conscience, "detained solely for exercising her right to freedom of expression."

"The raiding of our Baku bureau is a flagrant violation of every international commitment and standard Azerbaijan has pledged to uphold" said Nenad Pejic, RFE/RL's editor in chief and co-CEO.  "The order comes from the top as retaliation for our reporting, and as a thuggish effort to silence RFE/RL. This is not the first time that a regime has sought to silence us, and we will continue our work to support Azeris' basic right of free access to information and to report the news to audiences that need it."

"The operation of our bureau is incapacitated in Baku," said Kenan Aliyev, director of RFE/RL's Azerbaijani Service. "There has been a long ongoing crackdown on the media and NGOs in Azerbaijan, including the arrest of Khadija Ismayilova, the host of our show and our contributor. We view this as part of this ongoing campaign against independent media."

The Broadcasting Board of Governors is an independent federal agency, supervising all U.S. government-supported, civilian international media, whose mission is to inform, engage and connect people around the world in support of freedom and democracy. BBG networks include the Voice of America, Radio Free Europe/Radio Liberty, the Middle East Broadcasting Networks (Alhurra TV and Radio Sawa), Radio Free Asia, and the Office of Cuba Broadcasting (Radio and TV Marti).
(BBG/VOA/photo BBG)